By Catherine Hamilton and Shaanth Kodialam 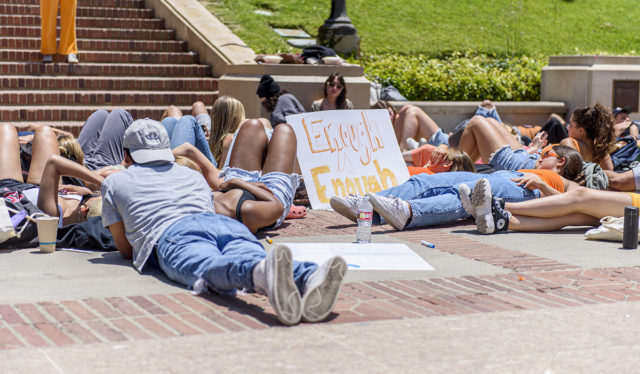 Students gather at a lie-in protest on May 31. A recent Supreme Court decision that struck down a New York gun restriction law raised concerns among University of California community members about its effect on California law and public safety. (Jeremy Chen/Assistant Photo editor)

A recent Supreme Court decision that struck down a New York gun restriction law raised concerns among University of California community members about its effect on California law and public safety.

On June 23, the court ruled 6-3 in favor of the New York State Rifle and Pistol Association to overturn a New York state law that required ordinary citizens to demonstrate special need to receive a license to carry concealed firearms in public, according to the majority opinion written by Justice Clarence Thomas. Previously under the law, only people with a special need to defend themselves, such as those in a life-threatening situation, would have been eligible to receive a permit, said Eugene Volokh, a professor at the UCLA School of Law.

The Supreme Court ruled against the law because the Second Amendment, guaranteeing the right to keep and bear arms, applies both at home and in most public places, Volokh said.

However, the court found that basic licensing requirements for acquiring firearms, such as background checks, may remain in place because they do not significantly interfere with people’s ability to defend themselves, Volokh said.

The case falls within a recent trend of the court expanding gun rights, said David Meyer, a professor of sociology, political science, and planning, policy and design at UC Irvine. He added that the court’s ruling builds on the language used in the 2008 case District of Columbia v. Heller, which popularized the right to self-defense with guns.

More than 40 states generally allow law-abiding citizens to carry firearms in public, with some states requiring a concealed carry license and other states not requiring one, Volokh said.

With the latest ruling, state legislators would need to find other ways to manage these permits, Meyer said. He added that he expects some states, including California, to rewrite laws regarding concealed carry permits, potentially creating off-limits locations for concealed carry weapons or setting minimum training hours.

Broadly, gun control laws will now be harder for state and local governments to justify, Volokh said. The court has expressed a belief that constitutionality depends on the history and tradition of gun laws and whether or not the restrictions interfere with the ability of citizens to defend themselves, he added.

On Friday, California Attorney General Rob Bonta released a letter to California attorneys and law enforcement officials regarding California’s gun regulations. In the letter, Bonta said the court’s ruling does not affect the necessary determination of good moral character in order to receive a gun permit.

However, Volokh added that this raises further concerns of a violation of First Amendment rights, as good moral character is determined by not only criminal history but also a history of racist or hateful speech in California.

The decision is saddening given the Supreme Court’s important role in American society, said Emma Barrall, a second-year microbiology, immunology and molecular genetics student who helped organize an on-campus protest May 31 in response to a shooting that occurred days earlier at Robb Elementary School in Uvalde, Texas. Around 60 participants gathered at Janss Steps for the lie-in, where individuals heard from several speakers and chanted, “No more silence, end gun violence!”

“I think it’s really frustrating for me,” she said. “And how we react … is just that we continue to support the government entities that we have access to.”