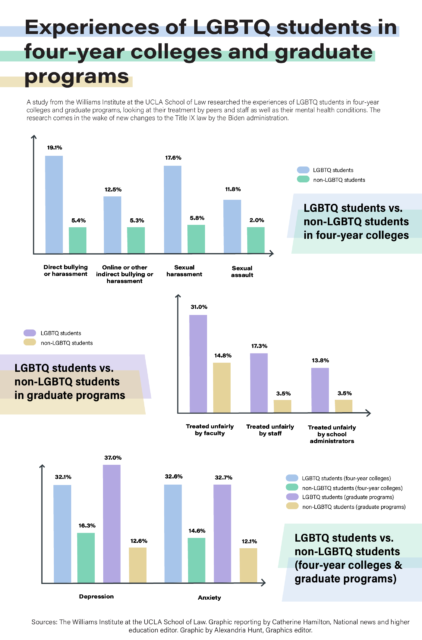 The Williams Institute at the UCLA School of Law published a report in May that found that LGBTQ students in higher education face higher rates of discrimination and mental illness when compared to non-LGBTQ students.

The report used data from the Access to Higher Education survey, a national survey of both undergraduate and graduate students ages 18 to 40. The researchers found that 32.6% of LGBTQ students in college face some form of bullying or discrimination, while only 18.9% of their non-LGBTQ peers experience this same form of harassment.

According to the report, the study hopes to shed light on the issues that LGBTQ students face in higher education and show educators the types of campus resources needed for the success of students within this community.

Kathryn O’Neill, a policy analyst at the Williams Institute and a co-author of the report, said LGBTQ students face distinct issues such as higher rates of assault.

O’Neill added that in addition to facing harassment, the data showed that LGBTQ students are more likely to act or present themselves differently in public to avoid discrimination. According to the report, one way they may do so is by altering their clothing and mannerisms while attending institutions of higher education.

Cowden added there is a lack of resources specifically for LGBTQ students at many college and university campuses, leading to a lack of institutional support at school.

“Making sure that there are some clear accountability measures in place and that all faculty understand the commitments of the university in terms of nondiscrimination and how we offer support to students – it’s really important,” Cowden said.

To address discrimination at the university level, the report made various suggestions for administrators such as including provisions for LGBTQ students and employees in campus nondiscrimination rules, ensuring that the campus population is aware these LGBTQ protections exist, and providing gender-neutral restrooms on campus, among other recommendations.

Elana Redfield, the federal policy director at the Williams Institute, said having resources for LGBTQ students is essential as they navigate higher education because they provide students with the necessary support to succeed in school.

“Having resources available makes it possible … to make sure that they are able to meet their day-to-day needs and so that they can participate in education,” Redfield said.

O’Neill added that LGBTQ-specific resources are essential in making students who belong to this community feel more comfortable at their universities.

“Having that kind of institutional commitment to saying, ‘We know we have LGBTQ students, and we care about them, and we want them to have the specific resources that they need’ – I think that does a lot to increase the kind of sense of belonging one might feel on campus,” O’Neill said.