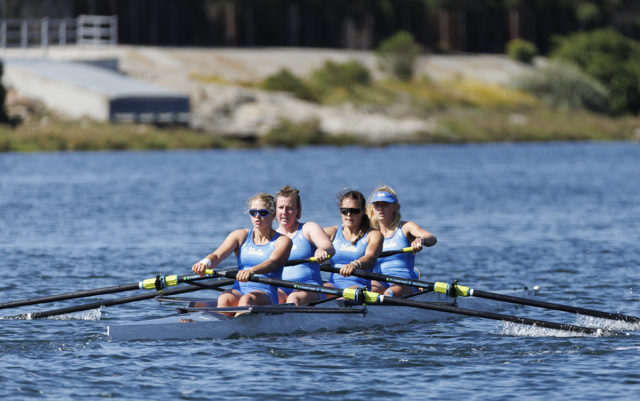 Members of UCLA rowing row. A pair of alumni from the program – Libby Costello and Sophia Denison-Johnston – alongside two other female rowers completed a record-breaking journey from California to Hawaii on Tuesday. (David Rimer/Daily Bruin senior staff)

As UCLA Athletics takes a break for the summer, professional sports are still in full swing, with many Bruin alumni representing. Each week during the summer, Daily Bruin Sports will take a look at the standout performances of former UCLA greats from the past week as we count down the days until fall.

In their college days, Libby Costello and Sophia Denison-Johnston rowed for only minutes at a time.

In June, the former Bruins decided to up the ante.

Costello and Denison-Johnston, alongside Adrienne Smith and Brooke Downes, completed a record-breaking journey Tuesday, rowing from San Francisco to Honolulu. The former UCLA rowers and their teammates completed the 2,400-nautical-mile voyage in 34 days, 14 hours and 11 minutes.

Enduring extreme winds and rough seas while relying solely on pre-packaged meals for fuel, the foursome took turns rowing in two-hour shifts and slept an average of 90 minutes per day.

In the process of setting the women’s world record for the fastest four-rower team to complete the journey, they also raised money for the Anxiety and Depression Association of America.

Denison-Johnston and Costello both enjoyed four-year stints with UCLA rowing before graduating in 2018 and 2019, respectively.

James Kaprielian has tossed his first scoreless start of the season.

The former UCLA baseball and current Oakland Athletics right-hander blanked the Texas Rangers through five innings of work Saturday. Kaprielian’s ERA in July now sits at 2.05 across four starts after the shut-out start.

After a breakthrough year in 2021 in which he went 8-5 in 21 starts and posted a 4.07 ERA for Oakland, the former Bruin had struggled to find his footing in 2022 until July. He entered the month with a 5.88 ERA before dropping it down to 4.74 with a pair of one-run starts and the scoreless outing.

Kaprielian served as a standout starter during his time in Westwood. After posting a 1.55 ERA out of the bullpen as a freshman in 2013, the right-hander served as UCLA’s ace in 2014 and 2015, culminating in All-American honors his junior season. He was ultimately drafted by the New York Yankees in the first round of the 2015 MLB Draft before being traded to the Athletics.

Despite his recent string of successful starts, Kaprielian’s Athletics squad currently sits dead last in the AL West with the second-worst record in MLB.

Josh Rosen will get another shot at cracking an NFL roster.

Set to suit up for his sixth team in five years, the former UCLA football quarterback was signed to a one-year deal by the Cleveland Browns on July 21. Rosen has failed to find a consistent home in the NFL since being drafted in the first round in 2018 but will have the opportunity to earn another chance in a backup role in Cleveland.

Rosen spent the 2021 season with the Atlanta Falcons, appearing in four games and throwing two interceptions on 11 pass attempts. The former Bruin’s brief stint in Atlanta came after a short stay in San Francisco with the 49ers, a three-month stretch on the Tampa Bay Buccaneers’ practice squad and a one-year campaign with the Miami Dolphins after being drafted 10th overall by the Arizona Cardinals in the 2018 NFL Draft.

Now, the former second-team All-Pac-12 honoree with UCLA is set to join a four-man quarterback room in Cleveland. With starter Deshaun Watson facing a potential suspension and Jacoby Brissett likely next in line, Rosen will compete with former Pittsburgh Steelers quarterback Joshua Dobbs for the No. 3 spot on the depth chart.