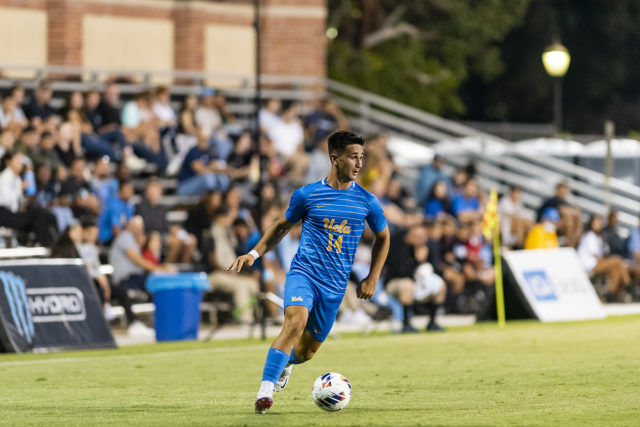 Face to face with a squad led by a former Bruin and member of their 2002 national championship team, the Bruins secured the victory.

UCLA men’s soccer (4-2-1, 1-0-1 Pac-12) defeated California (2-2-3, 1-1) in Berkeley 2-1 on Sunday afternoon. The blue and gold capped off its Bay Area swing undefeated, with the latest conference win coming against the Golden Bears and coach Leonard Griffin.

Griffin served as an assistant coach at UCLA from 2014-2016 and the former All-American won a national title as a defender for the Bruins.

Redshirt senior forward Kevin Diaz said getting back in the win column on the road was especially meaningful because it is the first time UCLA hasswept its Stanford and Cal road trip in almost a decade.

“This was huge,” Diaz said. “Especially after hearing we haven’t been unbeaten in the Bay Area since 2013, so that’s especially huge beginning the Pac-12 unbeaten.”

After logging two shots and zero shots on goal in a draw against Stanford on Thursday, UCLA rebounded within just the first half of the Cal contest – and then some. The Bruins notched 11 shots and four shots on goal in the first 45 minutes, almost doubling the Golden Bears’ six shot total.

However, the Golden Bears managed three shots on goal in that frame, one of which found the back of the net in the 40th minute. A wave of Cal commotion in the penalty box gave way to a behind-the-back kick by forward Shoei Honda that snuck past sophomore goalkeeper Nate Crockford.

Less than five minutes later, UCLA snapped Cal’s two-game shutout streak and answered with an equalizer when Diaz took a shot off a header from sophomore defender Aaron Edwards. The goal was Diaz’s second of the season and the Bruins’ first in their past three matches.

Both teams were quieter on offense coming out of the locker room, and midway through the second half the rain began to pour as both squads were forced to adjust to slippery terrain.

Redshirt sophomore forward Jose Contell said it was refreshing to play in the rain despite becoming acclimated to temperate southern California since moving from Valencia, Spain to attend UCLA.

“I’m kind of getting used to the always sunny Los Angeles, but I love to play in other weather,” Contell said, “When it’s raining, … I feel like I can run more and more, so to be honest I really love to play in that weather.”

The climate proved little to no obstacle to the Bruins, who got back on the board in the 76th minute off a corner kick. Contell got the opportunity to prove his stamina in the rain, logging his second goal of the season by tracking down the corner service to head it into the right corner.

Contell said the result from the set piece was encouraging because the Bruins have workshopped it since the beginning of the season, and it’s proof that the team is reaping the dividends when it most counts.

“Every week, we are focusing a lot on set pieces because we know that it’s a really important play at that time of the game, and we know that we can score or get a goal against us,” Contell said. “We scored in two set pieces (Sunday) so that shows that we are really working at that aspect of the game.”

Immediately after the Bruins nabbed the lead, the Golden Bears secured their first corner kick of the game – but without the same result. Cal got one more shot in the 86th minute but could not convert to force the draw.

Diaz said UCLA mirrored its strategy against Stanford and found success in those formations at Cal, limiting the Golden Bears to their one first-half goal.

“The game plan was almost like Stanford, … (and) we did good with the press,” Diaz said. “Afterwards we went to a straight five-three-two which helped break them down.”

Heading back to Westwood now, UCLA continues its season with a nonconference matchup against Cal State Fullerton on Saturday at 7 p.m.

“We’ve handled business away from home and now our job is to come home and do the same,” said coach Ryan Jorden.