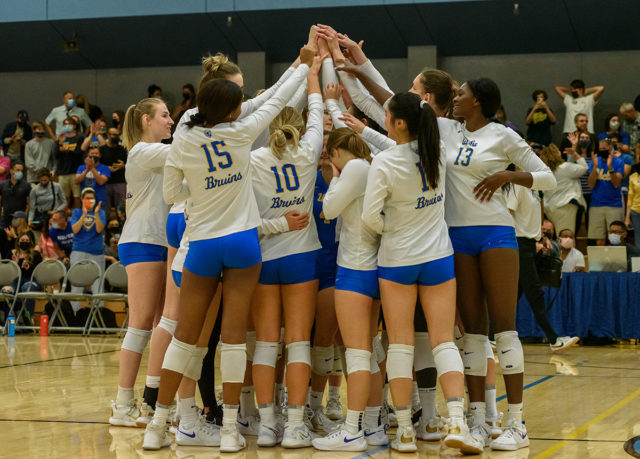 The UCLA women's volleyball team huddles before a match. The team face off against USC on Thursday. (Anya Yakimenko/Daily Bruin staff)

With four consecutive away tournaments under their belts, the Bruins are finally returning to Pauley Pavilion.

UCLA women’s volleyball (6-3) is facing crosstown rival USC (8-3) on Thursday. The home opener also marks the beginning of conference play, with a game against No. 18 Washington (8-2) on the slate for Sunday.

The blue and gold enters Pac-12 play after splitting matches against San Diego State and San Diego, sweeping the former but getting swept by the latter. A week prior, the Bruins suffered the same fate, falling 3-0 at the hands of Loyola Marymount but besting San Jose State 3-1 the day after.

“The analogy is like a dam breaks: You got to fix the part of the dam that’s broken and then another part starts leaking,” said coach Michael Sealy. “We will work on every aspect of our game over the next course of our season.”

San Diego proved a tougher match, with UCLA hitting under .090 in its final two sets and committing 16 errors across both frames.

Despite the loss against the Toreros, Dueck said the Bruins expect to see the results of their hard work soon.

“We’ve really been working on communication and doing our jobs well together,” Dueck said. “That’s going to definitely correlate into our season and definitely in this really important game Thursday.”

Last year, the Bruins went undefeated at home, posting a 12-0 record, including a 3-1 victory over USC. The blue and gold was the only Pac-12 team with a flawless home record in 2021 and has only six home losses since 2019.

The Trojans enter the matchup on a three-game winning streak as the hosts of the Trojan Challenge but posted an 8-7 home record in 2021.

Junior setter Kate Lane said the blue and gold is ready to take on USC and start conference play.

“We have to be out and be ready to compete every game no matter who is on the other side of the court and trust ourselves and play our game and not really worry about outer things that we can’t control,” Lane said.

In the tournament season to begin 2022, the Bruins hit at an average of .200 and held their opponents to a .138 hitting percentage, putting them at eighth nationally and second in the Pac-12.

With the season’s first home crowd awaiting the Bruins, Dueck says the experience will be unique.

“It’ll definitely be amazing playing at home,” Dueck said. “We obviously haven’t done that yet so it’s going to be a really cool experience for our first time. … Being at home will be nice and comforting.”

The Bruins have their home opener against the Trojans on Thursday at 7 p.m.