Opinion: Human rights protests require more support from UCLA and those outside Iran 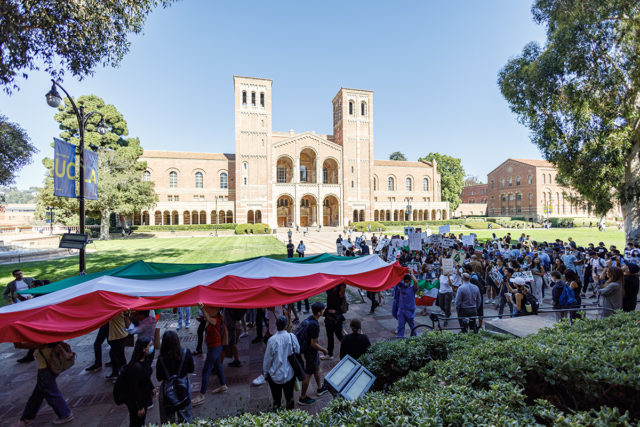 The once bright and colorful streets of Iran have been stained with the blood of innocents in the tireless fight for human rights for almost two months now.

22-year-old Mahsa Amini, also known by her Kurdish name Jina, was detained and severely beaten by Iran’s morality police for allegedly violating the country’s hijab mandate Sept. 13. Three days later, Amini passed away tragically after falling into a coma. The murder of Amini sparked civil unrest in Iran, with thousands of Iranians taking to the streets each day to fight against the oppressive government and demand their rights be respected.

The Iranian government has cracked down on peaceful demonstrations by arresting thousands of protesters, with some receiving death sentences.

According to the United Nations, the death toll has risen to at least 304 people, including many children, as of Nov. 11.

UCLA must exercise its power to effectively raise awareness of the tragedies in Iran.

News of Amini’s death and the subsequent protests broke out amid the migration of hundreds of students to Westwood for the start of the new academic year. The Iranian Student Group at UCLA was quick to organize a vigil for Amini to honor her life and provide a space for UCLA students – Iranian and non-Iranian alike – to gather and mourn the loss of Amini. Since then, the organization has held various rallies and provided safe spaces for students to process and work through the heightened emotions of this time.

Despite the collective action of student organizers to raise awareness of the injustices in Iran, UCLA remained silent for nearly a month until Chancellor Gene Block made an official statement affirming UCLA’s support for Iranians’ fight for human rights against an oppressive government.

“As an institution and as a community, UCLA is deeply committed to women’s rights, to justice and equality, and to human dignity for all,” Block said. “We firmly support democratic norms of free, open, and safe expression of dissent. We stand unequivocally against violence and repression.”

Although Block’s statement aims to show support for the free and safe expression of dissent, there’s no acknowledgment of the Iranian government’s role in suppressing the protests. As a result, the statement failed to convey the true severity of the issue.

In addition, UCLA has failed to provide adequate resources to undergraduate and graduate students impacted by the conflict. Over 500 UCLA graduate students are of Iranian heritage, many of whom have come from Iran to further their education and whose livelihood and families remain connected to the country.

It comes as no surprise that UCLA has not provided specialized resources to support the Iranian community. Instead, Iranian students were haphazardly directed to UCLA Counseling and Psychological Services, a general center for mental health resources that is notoriously understaffed and requires extensive wait times.

“The work that’s been done has been more so from the Middle Eastern Student Association and ISG,” said Anusha Entezari, a third-year dance and sociology student. “I haven’t really been seeing UCLA doing anything aside from that (Chancellor’s) email.”

This inaction is completely unacceptable from a multibillion-dollar institution that claims to promote equity, diversity and inclusion.

The university’s lack of active effort to amplify Iranian voices is telling of its limited commitment to advocacy, especially amid the violent crackdowns during Iranian protests at Sharif University of Technology.

UCLA has a long history of performative activism and demonstrates a recurring failure to take necessary action to support marginalized communities. While words are powerful, they can only go so far in the fight for effective change when done out of obligation.

Expressing support for democratic dissidents as a principle must be followed by tangible action specific to the struggle in Iran, such as directly criticizing the Iranian government or encouraging students and faculty to raise awareness to truly foster an impact.

As the protests in Iran have progressed and intensified, backlash against the movement has also gained traction. Misinterpretations of certain aspects of the protests – including the burning of scarves by women in protest of Iran’s hijab mandate – have attracted the attention of opposition who find the action disrespectful to the hijab, and consequently, Islam. This justification is used to invalidate the movement by claiming it to be anti-Islamic or Islamophobic.

This flawed perspective could not be further from the truth.

As Iranians have emphasized time and time again, the fight in Iran is a fight for women’s and human rights.

Melody Khoshneviszadeh, a third-year psychobiology student and co-president of ISG, said ISG was careful to never use the word “hijab,” since it has a religious context. On the contrary, this movement pushes against an oppressive government and fights for the right to choose.

“If you self-educate and learn about what’s happening in Iran, you as a human being are going to want to fight for this,” said Khoshneviszadeh.

Condemning the protests as Islamophobic ignores the bigger picture: Iranians are fighting for their rights, their families and better lives.

As the Iranian youth take to the streets to fight for their freedom, it is imperative those outside of Iran join them and do our part. While the geographical distance may seem like a daunting obstacle, the simple sharing of credible information on social media, educating yourself and raising awareness about the struggle in Iran will help immensely.

The struggle for human rights in Iran is no isolated matter. If Iranians can take back their freedom, the world will become one step closer to enshrining inalienable human rights for all.