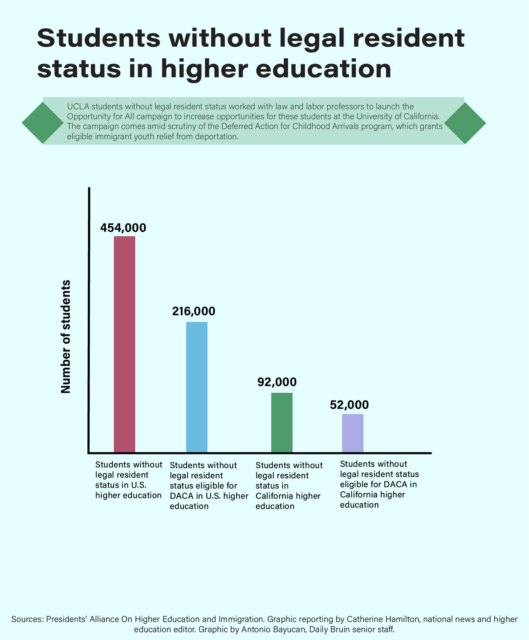 Students without legal status at UCLA are calling upon the University of California to hire and remove educational barriers for these individuals.

Research led by the UCLA Center for Immigration Law and Policy and backed by 28 immigration law scholars found that the 1986 Immigration Reform and Control Act – which bars the hiring of individuals without legal status – does not apply to state institutions such as the UC. With this reasoning, the University would be able to legally employ students without legal status for positions such as student workers or researchers, said Ahilan Arulanantham, faculty co-director of the CILP.

The Opportunity for All campaign – organized by students and faculty from CILP and the UCLA Labor Center – asks the University to act against the current widespread understanding of the IRCA and provide these students with job opportunities. The UC is the third-largest employer in California, and hiring students without legal resident status could provide opportunities for nearly 45,000 California students, according to The New York Times.

Additionally, in October, a United States appeals court temporarily halted the procession of new applicants for Deferred Action for Childhood Arrivals, which grants young people who entered the U.S. before June 15, 2007, temporary protection from deportation, according to Time. As those who are not eligible for DACA continue to struggle without resident benefits, the more than 800,000 recipients are also questioning their future in the country if the program is overturned, said Kent Wong, director of the UCLA Labor Center.

Currently, the UC is not authorized to hire students without legal status for research or instructor positions and student jobs such as working at the library, Arulanantham said. However, with the new legal interpretation, the University would be able to do so, he added.

“If a student has had a track record that merits any given educational employment opportunity, they should get that opportunity,” Arulanantham said.

During the November meetings of the UC Board of Regents – the University’s governing body – the regents heard from students working on the campaign, said Abraham Cruz Hernandez, a campaign organizer and fifth-year public affairs student.

Chair of the Board of Regents Richard Leib told the Los Angeles Times that the UC Office of the President has yet to announce an official decision, though the feasibility of the idea is intriguing. There have been other favorable responses from some of the regents and members of the California State Legislature, added Wong.

“We really want to show … the University that there is an urgent need for this,” Cruz Hernandez said. “They certainly don’t need and can’t be waiting for Congress to do something.”

Wong said preventing students from receiving employment has negative academic and financial implications, adding that many of his own students are adversely impacted by the IRCA.

“UCLA undocumented students, for more than 15 years, have been at the national forefront of advocating for immigration change,” Wong said. “It is wholly appropriate for UCLA and for the University of California to do the right thing and to provide job opportunities for undocumented students.”

Hamilton is the 2022-2023 national news and higher education beat editor. She was previously a national news contributor. She is also a second-year English and political science student.