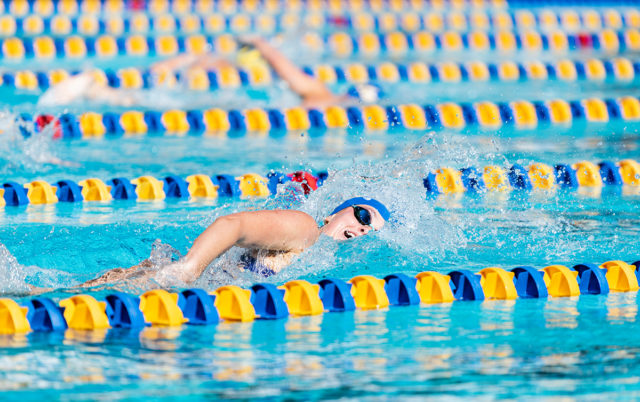 Sophomore swimmer Paige MacEachern competes in the freestyle. MacEachern was one of 17 Bruins to record a personal best at the Ohio State Invitational, where the team eclipsed 1,000 points to clinch fifth place out of 13 teams. (Alice Yang/Daily Bruin)

The Bruins were one of five teams to eclipse the 1,000-point mark this past weekend.

The Bruins’ trip was highlighted by 17 new best times and season-best times in all the relays. The squad also saw 10 separate top-10 individual finishers in various races.

Associate head coach Karissa Kruszewski said the personal records were a result of the team members getting some rest before the meet and their mindset coming in.

“We rested a little bit,” Kruszewski said. “The team really did get on board with the idea that this is the meet that we are going to hone in on, like we are going to swim fast. And they did.”

During the first day of the invitational, UCLA saw season-best times in both of the relays. In the 400-yard medley relay, the Bruins finished at 3:35.16, almost 10 seconds faster than their previous best.

Beyond the relays, the blue and gold also saw several individual best times. A trio of swimmers – senior Rachel Rhee, junior Maddie Wright and sophomore Eva Carlson – set personal bests during the preliminary heats of the 50-yard freestyle. In the finals of the event, Rhee and fifth-year swimmer Claire Grover got fourth and fifth place, respectively.

In the 200-yard individual medley, UCLA took home 20th and 23rd, with freshman swimmer Rosie Murphy setting her own record in the finals.

Murphy said she was proud of herself for working on the changes she wanted to make after her preliminary swim.

“Me and Jordan (Coach Jordan Wolfrum) talked about areas where I could be better,” Murphy said. “I definitely acted on those and thought about it logistically. I just improved on what we talked about.”

The following day of the invitational, the blue and gold once again saw best times from multiple swimmers. Senior swimmer Gabby Dang recorded a best time in the 100-yard butterfly preliminary heats, which also gave her an NCAA B Cut.

Sophomore swimmer Paige MacEachern also had a best time in the 400-yard individual medley finals to notch a third-place finish in the event.

MacEachern said breaking the 4:10 barrier in the finals of the 400-yard individual medley was an accomplishment she had been in search of.

“Breaking that time was definitely my goal for the year, so I am really proud to have done that,” MacEachern said. “Racing the girl next to me, I knew she was a really good breaststroker, so I knew if I just stayed with her and I gave it my best shot that I would just do my best.”

MacEachern said during this distance event, she told herself to just keep going.

“It was my very last event, so I kind of just told myself, ‘once you finish it, you finish the meet, and you’re done,’” MacEachern said. “I was just pushing myself to finish because it’s a long race.”

In the 200-yard backstroke, Murphy shaved three seconds between her preliminary and finals times.

Murphy said she relied on her teammates’ support and motivation to drive her to a faster time.

“Before finals, my teammates and I were talking about how it was the last race of the day, and it was pretty much a no pressure race,” Murphy said. “I think my teammates’ support and knowing that there weren’t any expectations really helped.”

In the final event of the meet, the 400-yard freestyle relay, the Bruins recorded a season-best time and placed seventh overall.

“They flourished with great attitude,” Kruszewski said. “They really stepped up, and they honed in on the idea of supporting each other, leading each other and building off of each other’s performances.”

The Bruins will return to competition Nov. 30 at the Toyota U.S. Open in Greensboro, North Carolina.

Baker is currently a Sports contributor on the swim & dive beat.