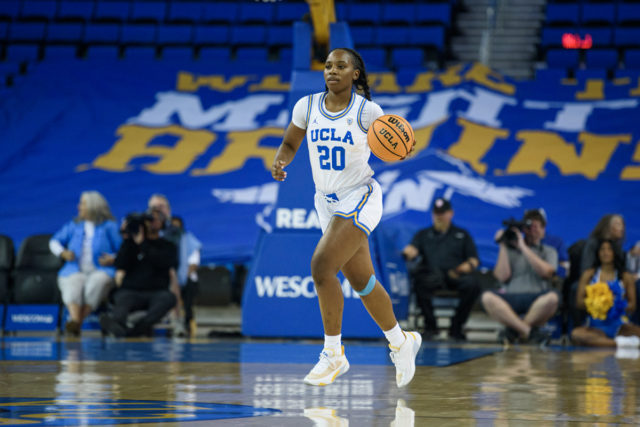 One bank off the backboard and Camryn Brown would seal the game. However, when she missed her layup, she caught the rebound for the put-back.

It failed to find the bottom of the net as the clock expired, and the Bruins headed to overtime.

But the senior guard avenged the miss with a driving layup off a critical steal with 3:43 to play in the extra period, then cashed in another layup to stretch the lead to seven. With Brown’s effort, the Bruins didn’t trail once in the final five minutes, finishing the Battle 4 Atlantis tournament with a championship title.

After sweeping South Dakota State and Tennessee 72-65 and 80-63, respectively, No. 20 UCLA women’s basketball (6-0) maintained its undefeated record by defeating Marquette (5-1) – who ranks first in the Big East – by a score of 66-58 on Monday morning. The blue and gold claimed the crown after a back-and-forth affair that featured 10 lead changes throughout the contest.

Senior guard Charisma Osborne, who achieved both Pac-12 Player of the Week and Battle 4 Atlantis Tournament MVP honors, made her first layup of the game in the first minute. But with six turnovers and a scoring drought at the end of the first quarter, the Bruins lost their advantage and trailed behind the Marquette Golden Eagles 11-8. Osborne’s first two points would be her only of the quarter.

In the second quarter, Osborne made only one of her three field goal shots, but she said she didn’t lose her focus with the help of her teammates and coaches.

“First, I want to give credit to my teammates and coaches just for continuing to encourage me throughout the whole entire game,” Osborne said. “Even when it’s a dead ball, they’re talking to me and encouraging me and saying I have the next shot and that no one can guard me. So shout out to them.”

Despite Osborne’s scoring drought, freshman guard Kiki Rice kept the blue and gold in the game with her offensive decision-making. Rice was the top scorer of the contest, collecting a new scoring record of 18 points as her parents cheered in the stands.

The Golden Eagles continued to battle for the lead, and the game was knotted at 27-27 by halftime.

Coming off an uncharacteristic five-point first half, Osborne capitalized on her playmaking experience and dished out the ball to redshirt sophomore forward Emily Bessoir, who hit the first three points to open the second half. Unlike UCLA’s 16-of-30 shooting clip in its last contest against Tennessee – tying its single-game record – the Bruins made only five of 17 attempted three-pointers in the whole matchup.

With a 6-0 run over just a minute, Marquette tied the game up once again at 42-42 in the third frame. The blue and gold had 10 minutes remaining to try to crown a champion.

From the late third quarter on, two of the upperclassmen accounted for five of the last seven baskets of the game.

Graduate student guard Gina Conti, UCLA’s second-leading scorer Monday morning, said it came from preparation before the contest and working together once they hit the court.

“It just goes to show that we followed the scouting report,” Conti said. “We all prepare, the freshmen included. The upperclassmen were talking throughout the whole game and in timeouts about what we needed to do, just reiterating what the coaches were saying. Really just when we touch the floor, we’re on the same page.”

With just under four minutes to go in the last frame of the game, the Bruins had a chance to clinch the lead. Three rebounds from freshman forward Lina Sontag and Bessoir in a single possession kept the ball alive, but the blue and gold was unable to put it away.

The Bruins continued to battle in overtime, scoring more points in the additional period than they had the entire fourth quarter. Brown, who collected five total steals during the contest, had a fast break off an opponent turnover and made a layup with just under four minutes to go.

“I couldn’t think about if I was tired – I was just thinking about my hands being active,” Brown said. “I really relied on all the preparation we do in practice to just get two straight stops. That’s all I was really thinking about.”

UCLA, with the help of its senior leadership, overtook the Golden Eagles and defeated them 66-58.

“When adversity comes, it’s not a matter of if. It’s a matter of when,” said coach Cori Close. “I’m so proud of their response. We always say that the work done in the dark always gets revealed in the light.”

The newly-ranked Bruins will test their undefeated record against Jackson State back in Pauley Pavilion on Friday at 2 p.m.