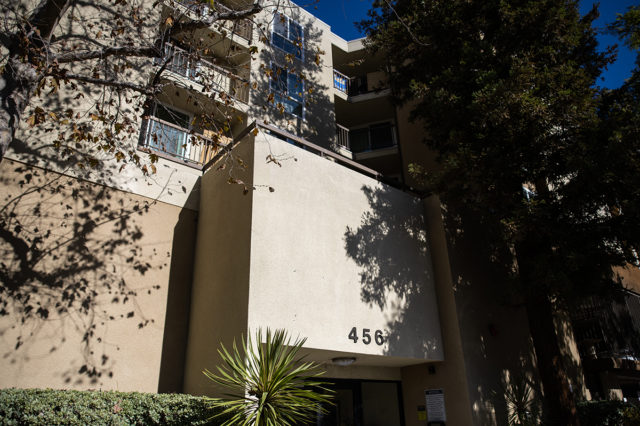 Westwood Chateau (pictured) was the subject of a recent Daily Bruin Enterprise investigation into health and safety issues in university-owned housing. More students have since come forward with accusations against UCLA Housing in recent weeks. (Alice Yang/Daily Bruin)

New accusations from current and former residents spanned four UCLA-operated buildings. Across three off-campus apartments and one dorm, Bruins said UCLA Housing’s disregard of their concerns and requests impacted both their physical health and academic performance.

In the Westwood Palm apartments, multiple students said they felt unsupported by UCLA Housing after raising concerns about mold.

Emilee Elyasian, a fourth-year psychology student, said she started experiencing debilitating migraines and asthma in mid-November, which she suspected were caused by mold in her air conditioning unit after a recent flood in the building. Mold exposure symptoms can include wheezing, headaches and shortness of breath, according to the National Institute of Environmental Health Sciences.

Elyasian began avoiding her apartment because she discovered this was the only way to temper her symptoms, she said. She reported the issue for inspection, but UCLA Housing claimed there were no visual traces of mold on any surfaces and that her problems were likely personal, she added.

“I told (UCLA) Housing that when I’m there (Westwood Palm), I have a headache, and when I’m not, I don’t,” Elyasian said. “They said it could be something you are dealing with, not us.”

In a buildingwide group message, students urged their peers to contact UCLA Housing about potential mold and traded complaints of experiencing similar issues while in their own apartments.

Messages reviewed by The Bruin show students felt UCLA Housing was oftentimes difficult to reach, with some writing that maintenance visits were short and staff members appeared dismissive about the multiple students experiencing symptoms.

Though maintenance workers inspected apartments in Westwood Palm, student messages reported that the checks were brief and did not seem to thoroughly check for mold. According to an emailed statement from UCLA Housing, a visual check is the first and sometimes only step of inspection.

“We conduct a visual inspection and gather from the resident as to why they suspect there is mold in the residence,” UCLA Housing said. “Maintenance staff looks for water intrusion, and if there are any visible signs of mold or AMG (Apparent Microbial Growth).”

Third-year sociology student Dominique Henry, another resident who alleged the presence of mold at Westwood Palm, said UCLA Housing was quick to respond to her complaints but lacked clarity during the repair process.

In late October, her shower caulking sprouted a mushroom. Although maintenance arrived the next day to remove the mold, she said fixing the hole left behind took approximately three weeks. During this time, she said maintenance workers would arrive without warning and offered no explanation for the fungus or state of the bathroom, adding the constant work noises and unannounced presence of people in her living space disrupted her sleep and studying.

According to an emailed statement from UCLA Housing, maintenance staff have permission to access an apartment unit – with or without a resident present – once an initial work order has been placed.

“Whenever a staff member is entering a unit, they will knock and announce themselves prior to entry,” UCLA Housing said in the statement. “If they are completing a work order, but the residents are not present, they will leave a hang tag behind to make the residents aware they accessed their unit.”

Alumnus Vlada Furman said she noticed a pattern of increasing idleness in UCLA Housing’s responses to her maintenance requests when she lived in the Venice-Barry family and graduate apartment complex from 2015 to 2020. For the last two years, she said the deadbolt on her door never fully locked despite an initial visit from maintenance.

“The original responses were usually pretty fast,” Furman said. “But then if the issue persisted, or it’s not something they fixed immediately, they wouldn’t come back for weeks.”

UCLA Housing said in an emailed statement that repairs may take longer than expected if there are scheduling conflicts or particular parts are needed to fix an issue.

“If residents ask, we will do our best to provide a time estimate for repairs,” UCLA Housing said.

Nine out of ten interviewed students described a pattern of UCLA Housing drawing out larger issues and dismissing smaller ones. They also reported a lack of transparency, with residents describing their interactions with UCLA Housing as frustrating, confusing and combative.

Westwood Chateau resident Samantha Perez Rangel found this lack of attention demoralizing. In early April, the fourth-year Chicana and Chicano studies and sociology student said UCLA Housing workers arrived to inspect her air conditioning unit as part of a maintenance check. Afterward, she said they informed her of an issue with her pipes related to a plumbing complication in a nearby unit and that her shower was unusable. Maintenance provided no further explanation and gave no time estimate of how long repairs might take, Perez Rangel added.

“UCLA Housing never contacted us. They never gave us accommodations,” she said. “The workers just told us, … ‘Find somewhere else to shower.’”

Two weeks after the initial maintenance visit and following daily calls to UCLA Housing, Perez Rangel and her roommates were offered temporary rooming in an on-campus dorm.

“They kept transferring me to different people, to different departments, until I finally reached somebody that helped me (get temporary housing),” Perez Rangel said. “So I was really shocked that I went in there and there were 12 other people living there, which made me even more angry.”

Although she decided to leave temporary housing that same day, it took roughly another week to fix her shower, she said. The approximately three-week ordeal was characterized by constantly having to plan when and where she would shower at friends’ apartments, which prevented her from fully concentrating on school, she added.

“I couldn’t focus on what had to be done academicwise, like homework, when I’m worrying about my housing situation,” Perez Rangel said.

When presented with residents’ allegations, UCLA Housing said in an emailed statement that they do not intend to dismiss students’ concerns.

However, Perez Rangel said her experience with UCLA Housing left her with feelings of neglect, adding she believes that if it were not for her persistent calls, UCLA Housing would not have helped.

Finn is a senior staff writer for Arts & Entertainment and PRIME. She was previously the Lifestyle editor from 2021-2022, an Arts reporter from 2020-2021 and a member of PRIME’s first intern class from 2019-2020. She is a fourth-year neuroscience and public health student from San Francisco, California.