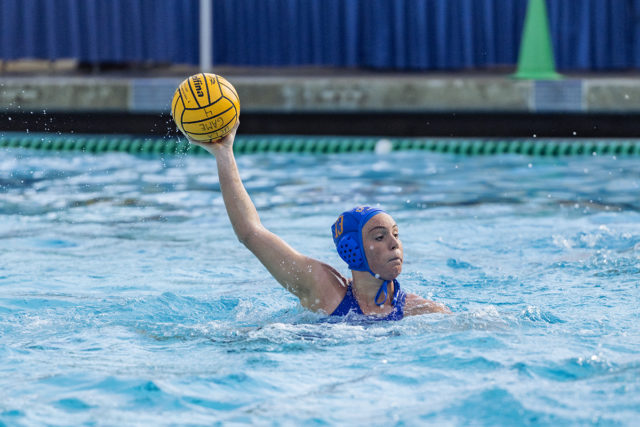 Graduate student center Ava Johnson lifts the ball out of the water as she scans the pool. (Javier Jauregui/Daily Bruin)

Correction: The original version of this article’s infobox incorrectly stated the score of UCLA’s game against UC Santa Barbara was 16-2. In fact, the score was 11-6.

The Bruins are starting off their season strong as the first weekend of water polo comes to a close.

No. 3 UCLA women’s water polo (5-0, 1-0 MPSF) won all four of its games at the UC Santa Barbara Winter Invite on Saturday and Sunday. The performance marked the second season in a row that the Bruins have begun with a perfect showing at a UCSB-hosted tournament and a 5-0 record.

Graduate student center Ava Johnson said the blue and gold likes to use the Santa Barbara tournament to see where it stands after the offseason.

UCLA started off the tournament with a dominant performance Saturday morning, defeating No. 21 San Diego State (2-2) by a score of 21-5. The Bruins had 10 different players score goals against the Aztecs, with Johnson and freshman attacker Taylor Smith leading the team with four goals each.

UCLA competed in a closer match Saturday afternoon, defeating No. 15 Wagner (4-1) by a score of 14-7. The Bruins once again had 10 players score goals, with Johnson adding two tallies to her total for the weekend. Phillips got the start in net against Wagner, recording nine saves while allowing four goals, before Chiang swapped in for the second half, recording four saves and allowing three goals.

While playing so many games can get exhausting, the Bruins have been preparing all offseason for such situations, Phillips said.

“In training, we treat every day like we are playing a game,” Phillips said. “I think that really prepared us for these moments when we’re tired of playing with our same energy and standards, and we have to keep focusing on the basics.”

On Sunday morning, UCLA recorded a 16-2 victory over No. 11 UC San Diego (2-2). Freshman utility Sienna Green, sophomore attacker Emma Lineback and graduate utility Katrina Drake each recorded a hat trick in the game as they led the Bruins to their fourth win of the season. Chiang was the starter in goal, allowing two goals while recording five saves before Phillips came on in the second half and recorded a nine-save shutout.

UCLA had its most competitive game of the weekend Sunday night against No. 19 UCSB (5-1). The Bruins and the Gauchos traded goals throughout the first half before UCLA scored two in the last minute of the second period to go up 5-3. UCSB pulled within one during the third period, but Phillips did not allow any goals during the fourth as UCLA secured an 11-6 victory.

Johnson said although the UCSB game presented challenges, she is proud of how the team capped the tournament.

“Santa Barbara is a great opponent,” Johnson said. “They were super physical, and they kind of outplayed us in the first half. But finishing that game strong is just a testament to our grit and our ability to close out games. It’s in those moments that we have to lean on each other, and I’m proud of the way we finished.”

Coach Adam Wright shared similar sentiments, stating he was happy with how his team performed and hopes that they can learn from the mistakes made this weekend.

“A lot of learning moments,” Wright said. “The biggest thing from having the opportunity to play five games in three days is that we want to create opportunities for our team and opportunities to grow and learn. And there were a lot of them.”

UCLA will head to Berkeley on Saturday for the California Invitational.

Grimes is currently a Sports reporter on the men's soccer beat. She was previously a contributor on the beach volleyball, men's soccer and women's volleyball beats.