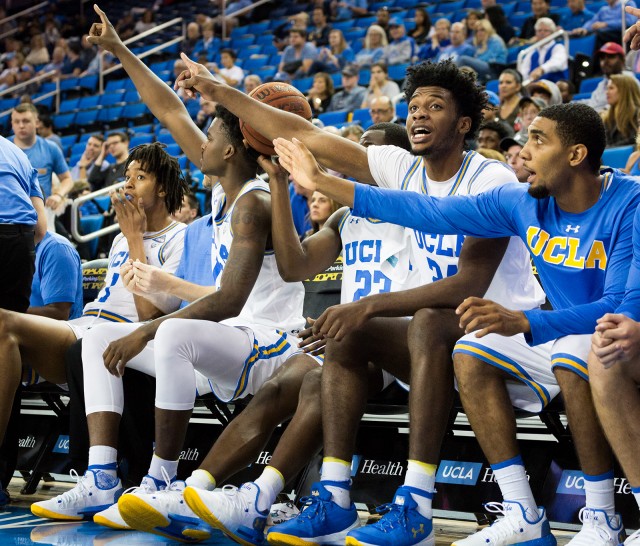 Student-athletes gave up their Thanksgiving break to compete all around the country last week, but the Bruins combined to finish 0-9 across five different sports. Each of the Daily Bruin Sports editors picked which program’s winless holiday weekend stung the most.

UCLA men’s basketball is a young program with a lot of injuries to key players – I get it.

However, its performance over the Thanksgiving holiday at the Continental Tire Las Vegas Invitational left much to be desired, and frankly, it was hard to watch.

On Thanksgiving night, Michigan State (5-2) ran UCLA (4-2) off the court with a barrage of 3-pointers and an overall shooting percentage of 51.6. To be fair, UCLA never looked great against any of the smaller programs it faced in the first few weeks of the season, but I would have expected the Bruins to have an extra pep in their step playing the then-No. 11 team in the nation.

Despite my frustration, the Spartans are an outstanding team with an all-time great in coach Tom Izzo leading the program. Sure, it was a disappointing way to spend the holiday evening, but Friday’s game against then-No. 6 North Carolina stung the most.

The Tar Heels – who had lost to unranked Texas Longhorns the night before – were a team that I expected the Bruins to have a good chance of defeating.

The Bruins built up an early 11-point lead which was impressive, but sure enough, it crumbled in a matter of minutes. UCLA then lost the game after being outscored by 21 points in the second half.

But it wasn’t the fact that UCLA lost that was so frustrating.

The Bruins had a team that had lost the night before on the ropes, and they let the momentum slip away with little to no fight. If players on a young team like UCLA are going to learn and grow together, those are the games they need to close out.

The season came to a heartbreaking end for the Bruins.

The Bruins scored twice in under one minute to equalize the game at 2-2 in regular time but neither side could break the deadlock in overtime.

The drama of penalties is unrivaled in any sport. It seems simple to just kick the ball into an 8-meter frame from 12 yards out, but the process to have the perfect technique is clouded with nerves. It’s a nightmare for any player to have the entirety of a season relying on the execution of a kick done dozens of times in practice.

UCLA had the experience of winning a penalty shootout 4-3 last season against Duke in the NCAA College Cup semifinals to advance to the final against Stanford. Unlike then, the Bruins replaced junior goalkeeper Teagan Micah with redshirt freshman goalkeeper Lauren Brzykcy in goal for the shootout.

UCLA missed two kicks in the shootout and UNC scored all four of their efforts. Senior forward Julia Hernandez’s kick to the right was saved and junior midfielder Jessie Fleming’s attempt to the corner was parried away by Tar Heels goalkeeper Samantha Leshnak to clinch the win.

The loss marked the end to a remarkable streak, as the Bruins had won 12 matches in a row and scored 44 goals in that period since falling 3-2 to Stanford. Sophomore forward Ashley Sanchez recorded either a goal or assist in 13 straight games, including the UNC match, and was a part of a UCLA offense that had scored a total of 15 goals in three postseason games.

It is cruel the Bruins will not be appearing in the College Cup, ending a record-breaking season in the oft-tragic drama of penalties.

It’s the poor shooting, the lazy defense and the inexperience. It’s basically everything.

UCLA women’s basketball (3-4) lost to just four unranked opponents over the last two years. But the Bruins have already dropped three against unranked teams less than a month into their season.

UCLA’s 83-49 loss to North Carolina was the program’s worst to an unranked opponent under coach Cori Close, who took over the program in 2011.

After graduating its top-two scorers from the last season in former guard Jordin Canada and former forward Monique Billings, the Bruins are struggling to get points on the scoreboard.

The Bruins – who are fresh off of three straight Sweet 16 appearances for the first time in program history – averaged shooting 41.7 percent from the field over those three years.

Against Kentucky, UCLA went 51.7 percent – almost 15 percent better than the Wildcats – but Kentucky made seven more 3s and six more free throws than the Bruins for the 75-74 win.

Close needs to find a way to clean things up before conference play – in which five teams are ranked in the top 25.

Or else, it’s going to be a long season.

The Bruins needed one more win.

UCLA women’s volleyball (13-14, 8-12 Pac-12) headed into the weekend one win shy of clinching a spot in the NCAA tournament. But after falling to both Colorado and USC, the UCLA finished with a record under .500 and became ineligible for the postseason.

UCLA tested a new starting lineup against the Buffaloes on Wednesday – but it fell flat.

Redshirt freshman middle blocker Emily Ryan got the first starting nod of her career, and was the only Bruin to record double-digit kills. Sophomore outside hitter Mac May – who reached double figures in kills in 21 matches this season – notched only eight kills.

After dropping three straight sets against the Buffaloes, the Bruins were in a must-win situation against the Trojans on Friday.

UCLA dropped its first two sets to USC but came back to win the next two to force a decisive fifth set. But with a set score of 15-9 in the Trojans’ favor, the Bruins’ season came to an end.

This year marked the program’s first-ever losing season. In coach Michael Sealy’s nine seasons with the Bruins, he has only finished with a .500 record once, and has led the Bruins to the NCAA tournament seven times.

While UCLA’s postseason chances seemed slim after it dropped seven of its last nine matches prior to the weekend, the final two losses still hurt.

The season was a lost cause, but that doesn’t mean the loss to Stanford didn’t sting.

Of all the other losses last week, UCLA football’s easily hurt the most for me.

Men’s basketball is still early in the season, and two losses – while meaningful – do not sink a season in collegiate basketball. Women’s basketball is a young team with the least star power they’ve had in years, so my expectations for them have been tempered from the start of the year.

Women’s volleyball’s season was hectic, and by the end of it all, I would have rather had them miss the postseason than see them get destroyed and embarrassed on a national stage. And women’s soccer made it to penalty kicks in the Elite Eight – far from a disappointment.

But football, football had me riding a roller coaster of emotions all season long. I had high hopes, and the Bruins started 0-5. A two-game winning streak got me back on board, and then the Bruins followed that up with a fresh losing streak.

Coach Chip Kelly’s first season in Westwood was supposed to be special, and he prevented this season from becoming a nightmare by beating USC. But Kelly had the chance to do something that hadn’t been done in 20 years – beat all three California state rivals in one season.

And the worst part is that they were so, so close. Iconic plays – including a safety by sophomore defensive lineman Martin Andrus Jr. and a 93-yard kick return touchdown by sophomore cornerback Darnay Holmes – brought the Bruins back within striking distance after it seemed like the game was over.

When I should have been relaxing and enjoying time off with my family, I had to stress over the entire football game all Saturday instead.

And despite getting two chances to tie the game in the final two minutes, graduate transfer quarterback Wilton Speight and the Bruins just couldn’t pull through.

What an awful way to spend a holiday weekend.

Forburger is the 2019-2020 editor in chief. She was previously an assistant Sports editor for the women's volleyball, gymnastics, softball, swim and dive and rowing beats and was a Sports reporter before that.