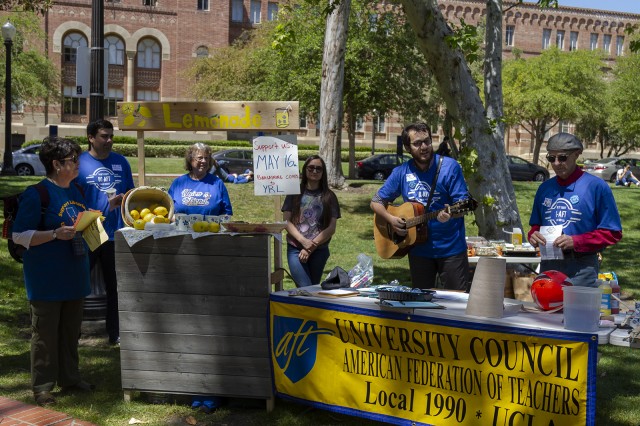 The University Council for the American Federation of Teachers Local 1990, which represents University of California lecturers and librarians, initiated negotiations with the UC by holding a kick-off event in Dickson Court at which they passed out fliers and signed up students for future meetings. (Rachel Hefner/Daily Bruin)

The University Council for the American Federation of Teachers Local 1990, which represents UC lecturers and librarians, initiated the negotiations by holding a kickoff event in Dickson Court at which they passed out fliers and signed up students for future meetings.

Lisovsky said he thinks lecturers are being treated like second-class citizens compared to tenured faculty.

Lisovsky said he thinks lecturers do not receive sufficient salaries or benefits. Lecturers make 50 cents on the dollar of what professors make despite doing much of the same work, he said.

Lecturers also have limited benefits in terms of hiring practices, as they are often hired on a part-time or contingent basis, he said.

“It is very difficult to make a living as a lecturer,” Lisovsky said. “There are a few lucky ones like me who have this continuing appointment but most lecturers don’t know for how long or how much they will be working for.”

Lisovsky said lecturers do not receive much notice regarding the stability of their position, which is stressful for young professionals who are trying to put a down payment on a house, trying to pay rent or start a family.

Mia McIver, president and chief negotiator of UC-AFT and an English lecturer, said she has been a UC faculty member for 10 years and still doesn’t know if she will be able to keep her job in the fall. Her salary forces her to work a second job and doesn’t allow her to give her full attention to her students, she added.

“I’m part of this campaign for both myself and my colleagues to try to make sure that teaching in education gets the respect and dignity that it really deserves,” she said. “None of us get into this because we want to get rich, but we do it because we love our students and teaching and we want to do both of these things in a supportive environment.”

McIver said she wanted to revise the current contract so that part-time lecturers can work in better conditions and become better able to support the education of their students.

Lisovsky added he thinks students deserve to be taught by faculty who are not constantly rushing to a second job, searching for new employment or being forced out of a department after a year.

However, the negotiations may or may not end in agreement.

“We don’t expect them to give us anything and we will have to bargain (with) them and increase our numbers in terms of membership,” he said.

McIver said it has usually taken UC-AFT and the UC a long time to reach an agreement, but she hopes to have productive conversations with the University.

Sarah McBride, a UC spokesperson, said in an email statement the University will work hard to negotiate a fair agreement as quickly as possible.

“UC’s goal is a multi-year agreement that includes market-competitive pay consistent with past years and excellent benefits,” McBride said. “We recognize the significant contributions our lecturers make to UC’s education mission.”

Alison Lipman, a full-time ecology and environmental biology lecturer who sits on the Contract Campaign Committee and Table Team for UC-AFT, said the main goal of the union is increasing equity for faculty and improving student access to teachers.

She also wants to increase faculty diversity, as women and people of color are less likely to become tenured faculty, she said. She added she wants to reduce this inequity in university faculty to improve the quality of education.

Eve McNally, a fourth-year political science student, attended the event and said she was also very interested in upcoming negotiations between the UC and UC-AFT taking place May 16.

“I am attending this kickoff because I’ve seen how UC is disrespectful toward workers and want to make sure that part-time lecturers get to enjoy similar benefits as full-time professors,” she said.

Sydney Deardorff, a third-year political science student, said she first learned about UC-AFT members’ struggles at a union rally in March and wants to support their cause.

“I think UC-AFT’s cause is really important, especially for lecturers, and it’s important for them to get better wages and contracts,” she said.

Lisovsky said UC-AFT hopes to increase its membership in order to be taken seriously by the UC.