By Sameera Pant and Kennedy Hill 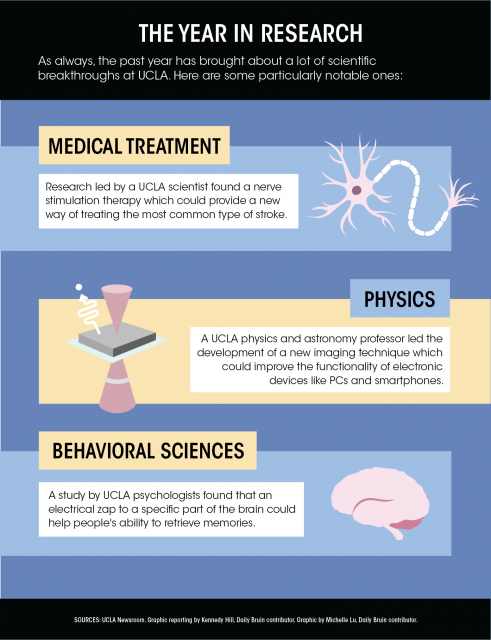 In the past year, UCLA researchers have uncovered findings in nearly every field of science. The following is a summary of some of the key research undertaken in the fields of physics, medical treatment and behavioral sciences.

Researchers from UCLA and USC developed an imaging technique with more versatile output than a standard electron microscope, according to a press release published Oct. 29.

This new imaging technique pairs an electron microscope, which transmits a beam of electrons through a thin specimen to create an image, with an amplifier that tracks the electrical current in the object being scanned. UCLA physics and astronomy professor Chris Regan led the study, which was published in Physical Review Applied.

Standard electron microscopes can only see what types of atoms are present in a sample, but this new imaging technique can allow researchers to understand the properties of the material, such as conductivity, Regan said.

“The (electron) microscope can see a gold atom, but it can’t tell you whether the material you’re looking at is metal or an insulator. Often that’s what you care about,” he said. “So we’ve taken this machine that could previously tell you where the atoms are (that) can now tell us whether they conduct electricity or not.”

This technique works to create functional imaging alongside an atomic image of the material. By monitoring the electrical current in the material while it is being scanned, researchers will be able to create a live feed of the electronic changes occurring inside a device as it functions, Regan said.

“You can see the properties that matter for the functioning of the device. It’s kind of like surgery, where you can open up the patient without destroying them to see how the heart beats, ” he said.

“One of the main limiting factors in modern microprocessors is thermal transport. Your phone could run faster if it didn’t get hot,” Regan said.

Through functional imaging, manufacturers could map the thermal changes in a microprocessor to identify which areas of the chip could be engineered to better regulate temperature, Regan said.

A study led by a UCLA scientist discovered a nerve stimulation therapy that could provide a new way of treating the most common type of stroke, according to a press release published May 24.

The study, which looked at 1,000 patients at 73 medical centers in 18 countries, found the effects of a patient’s stroke were reduced three months after using the nerve stimulation-based treatment. Jeffrey Saver, co-principal investigator of the study and director of the UCLA Comprehensive Stroke Center, helped develop the new technique.

A stroke is an injury to the brain due to rupture or blockage of a blood vessel or artery. There are two main types of stroke, Saver said.

This treatment will be used to alleviate ischemic strokes. According to a 2017 update from the Centers for Disease Control and Prevention, 87% of strokes in the United States are ischemic.

The technique is different than current ischemic stroke treatments, which aim to reopen the blocked artery. Instead, it aims to increase the blood flow through the remaining open arteries and get the blood around the blocked region, Saver said.

This increase in blood flow opens the arteries surrounding the blockage, circumventing the blocked region to treat the endangered part of the brain. Blood flow is stimulated through a toothpick-sized electrode temporarily inserted into the roof of the mouth, Saver added.

Saver said the treatment is remarkable because it is effective eight to 25 hours after a stroke has started. Clot-dissolving treatments can be life-threatening in this period, he said.

“Clot-dissolving treatment is only approved for use up to 4 1/2 hours after the start of the stroke. It can cause bleeding in the brain.” Saver said. “The benefits outweigh the risks early on.”

The researchers are currently focused on holding further patient trials and exploring how well the treatment will function in combination with clot-dissolving medication, Saver said.

UCLA researchers discovered a strong correlation between the stimulation of a specific brain region and increased memory retrieval, according to a press release published May 30.

By electrically exciting a region of the brain behind the left eyebrow, a subject’s ability to retrieve memories and their context is greatly increased. Jesse Rissman, a UCLA psychology assistant professor, led the study.

Although there have been numerous studies identifying the link between electrical brain stimulation and memory, this study is the first to test the role of the left rostrolateral prefrontal cortex in memory formation and retrieval, Rissman said.

While its method of influence over memory is still unknown, Rissman said the study, published in the Journal of Cognitive Neuroscience, is one of the few to identify a significant correlation between brain stimulation and increased recall ability. After stimulating the specified region, the neurons become more easily activated and aid in the process of memory retrieval, he said.

“The electrical current doesn’t directly activate the region of the brain we’re targeting,” Rissman said. “It just boosts the excitability – how ready those neurons are to fire when they’re needed.”

Rissman said while further investigation is necessary, this research has a versatile range of potential applications, from improving a student’s recall on a test to treating patients with memory loss.

“With further study, we might be able to better understand what aspects of memory we can and can’t enhance with stimulation,” Rissman said. “People suffering from Alzheimer’s disease, dementia – those are all potential applications.”