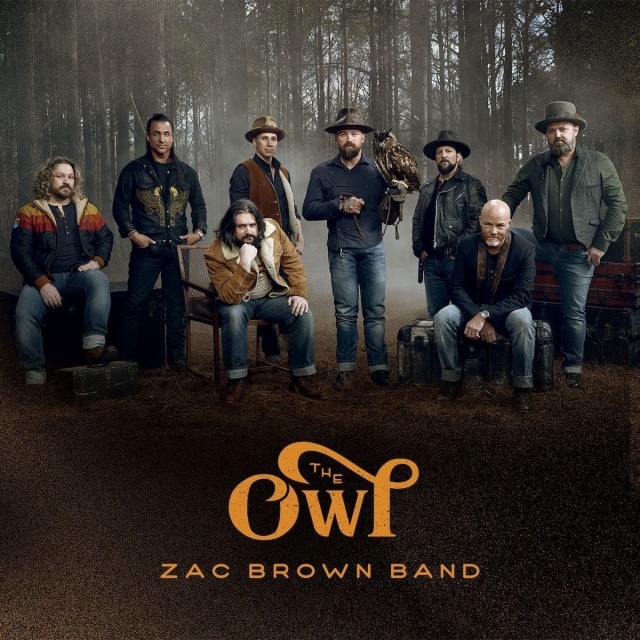 Zac Brown Band made it to the top by playing everything from southern rock to island-inspired country – all leading up to their best effort in country-pop fusion yet.

“The Owl” – Zac Brown Band’s eighth studio album and first since 2017 – dropped Friday following a string of three summer singles. Coming in at only 11 tracks, the album leaves die-hard fans wishing the album stretched longer, but each new song demonstrates a journey into fresh and modernized territory for the seasoned country band.

The record’s fourth track, “Someone I Used to Know,” was released nearly 10 months ago, but its balance of country and pop – emphasized in the heavy use of electric violins – encapsulates the album’s blended essence best. Shawn Mendes co-wrote the song with lead singer Zac Brown and, while the band’s signature acoustic guitars and fiddles are still present, the bombastic, sing-along chorus and out-of-character sound mixing take the song somewhere new.

But Brown stays true to his authentic roots throughout “The Owl,” releasing two slower ballads in the vein of older hits – such as “Colder Weather” and “Goodbye in Her Eyes,” – but the new tracks take on a bit more meaning given the artist’s real life circumstances. Brown divorced his wife in 2018 after a 12-year marriage and five children, and the major crossroads in his life left a noticeable emotional impact on the slower songs of “The Owl.”

While the group has released songs about tumultuous relationships in the past, the new additions to their catalog are much more personal due to the inseparable tangential connection to Brown’s personal life. The final song on the album, “Leaving Love Behind,” is blunt with its lyrics about breakups, but the vocal performance is raw and emotional enough to help it stand out from other tracks on the record.

The album’s other ballad – “Finish What We Started,” featuring singer-songwriter Brandi Carlile – is notably more energetic than the album’s melancholic closing song. However, the duet is still lyrically down-to-earth and emotionally moving considering its alignment with Brown’s life in lyrics like, “I’m standin’ at these crossroads, tryin’ to find myself / Lookin’ at the future.”

The third single and the record’s eighth track, “Warrior,” continues the band’s themes of military appreciation seen in past songs. But where 2015’s “Dress Blues” and the bridge of 2008’s “Chicken Fried” were slower ballads, “Warrior” separates itself as an upbeat and aggressive dive into the psyche of a Navy Seal who Brown met several years ago. The song still supports the troops – like many cliché country songs – but lines like “The pain takes a backseat for a cause / No applause from his country” offer a fresh, introspective take for the genre.

On a more familiar-sounding note, the twangy guitar riff in “Me and the Boys in the Band” fits in with the band’s older grunge-southern rock songs and helps ground the album in the band’s signature sound. The garage band, casual style rock utilizes country elements and backup singers to bring it together into a complete package.

On the other hand, “God Given,” blends that same musical style with a Keith Urban-esque vocal performance. Brown demonstrates impeccable vocal range with playful lyrics, but the style certainly strives further into mainstream pop than was expected. The same goes for “OMW” – the modern lyrics and upbeat techno beat make it a good song for the radio, but its superficial-sounding chorus can be jarring compared to the band’s past work.

The album’s diamond in the rough, however, is “Shoofly Pie” – a thematic callback to the low key, just-for-fun songs of Brown’s earlier work. A song about a mid-Atlantic Dutch dessert sounds goofy – and it is – but it harkens back to songs like “Sic ‘Em on a Chicken” that were simple, backwoods band jams. It may not fit in thematically with the preceding songs on the album, but it is a nice change of pace regardless.

For listeners who have enjoyed Zac Brown Band’s pop-inspired songs from the past, there are plenty more resembling that sound on “The Owl.” Collaborations with Mendes, Skrillex and OneRepublic’s lead singer Ryan Tedder help the record lean further into that sound than the group ever has before.

“The Owl” manages to go in a new direction – albeit one that isn’t as outside the box as Zac Brown Band’s past work with jazz and metal – while both claiming a stake in the pop-country game and staying true to the band’s beginnings.