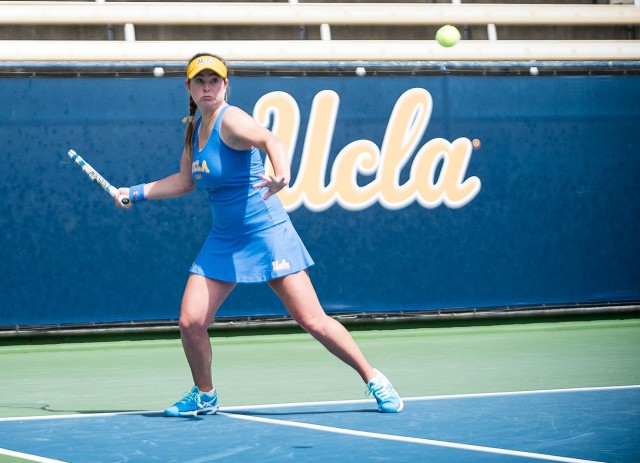 UCLA women's tennis junior Abi Altick is one of four Bruins traveling to the Jack Kramer Club Collegiate Invitational. Altick will get a first round bye as a seeded player, entering the tournament as the No. 70 singles player in the ITA preseason rankings. (Alice Naland/Daily Bruin staff)

Four Bruins will travel to the second-to-last tournament of the fall season.

UCLA will have three seeded singles players who do not have first round matches, while Johnson is unseeded and will take on UC Irvine’s Halla Alajeely in the first round.

Because only 39 players are competing in the six-round, 64-spot draw, multiple unseeded players will also automatically advance to the second round. Thus each of Vagramov, Goulak and Altick has her second round opponents determined.

Vagramov will take on UC Irvine’s Stephanie Nguyen in her first round match, while Goulak will play Shakhnoza Khatamova of UCSB, only needing three wins to reach her second quarterfinal as a Bruin. Altick enters the tournament ranked as the preseason No. 70 singles player by the ITA, and will take on the third Anteater of UCLA’s opening round, Jenna Schlatter.

Altick and Johnson will not be playing in the doubles draw together, although the two reached the finals of the ITA Regional Championships before falling to a fellow Bruin team of Goulak and freshman Abbey Forbes. Altick and Johnson reached a season-high doubles ranking of No. 82 while playing the team’s last seven matches together, and clinched the Bruins’ doubles point against No. 1 North Carolina in the quarterfinals of the NCAA Championships.

Vagramov and Goulak will be paired up in doubles for the first time this season, both having played with two different partners already this fall. Goulak is 7-0 in doubles this fall season including winning the previous tournament with Forbes, while Vagramov is 3-2 thus far.

The duo enters as the No. 1 seed in the 18-team bracket, and will take on Marymount’s Hailey Mcnall and Miah Webb in the second round after an automatic first-round bye.

After the Kramer Classic ends Sunday, UCLA only has one more tournament on their fall schedule – the Oracle ITA National Fall Championships held in Newport Beach, California.