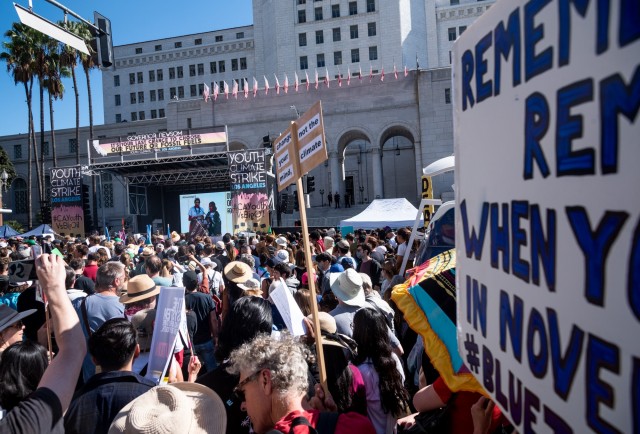 The Los Angeles youth climate strike saw many attendees bring handmade signs with messages on everything from environmental issues and the climate crisis to social justice and veganism. (Daniel Leibowitz/Daily Bruin staff)

Around 3,000 protesters gathered at the steps of the Los Angeles City Hall to protest the continued use of fossil fuels and oil drilling around Los Angeles.

The protest is part of weekly school climate strikes around the world.

They marched through the streets of Downtown LA until returning to City Hall to listen to speeches by several teenage activists, including Thunberg.

In August, Thunberg famously crossed the Atlantic Ocean by sailboat to attend a United Nations climate summit in New York. She has since participated in youth climate strikes around the nation.

Thunberg said at the event the world is beginning a climatic and ecological breakdown.

“We cannot continue to look away from this crisis anymore,” she said. “If our parents won’t speak up for us, then we will.”

Thunberg said she recently visited Paradise, California, where a wildfire destroyed 18,000 buildings and killed 86 people. Wildfires throughout California are being intensified by the climate crisis, she added.

Many of the activists who gave speeches at the event came from minority and indigenous backgrounds and described how pollution from fossil fuel use affects the health of their communities.

Nalleli Cobo, an 18-year-old activist, said she has been fighting urban oil drilling since she was 9 years old.

She said she developed headaches, severe stomach pains, heart palpitations, asthma and a higher risk of cancer after living near an active oil drilling site run by AllenCo, an oil company that operates on land leased by the Roman Catholic Archdiocese of Los Angeles.

Cobo added she helped start a grassroots campaign in her community that helped shut down the oil well. She later helped start Stand-L.A., which fights against neighborhood oil drilling throughout the state.

“I was forced to fight for my community, our health and our lives,” she said. “Nobody was going to defend the poor, black and brown, Spanish-speaking, low-income, immigrant community.”

Many of the protesters were also students who skipped school to attend the event.

Jacob Pearson, a fourth-grade student at Our Community School in the San Fernando Valley, said his grandmother took him out of school to attend the event.

Jacob said he was concerned about the climate crisis after hearing what Thunberg has said in the past, and wanted to see what was going on.

“I felt like I should come and help because I’m a kid,” Jacob said. “I still have a lot of time to come and I don’t want my dreams taken away.”

Megan Goss, a 10th-grade student at Culver City High School, also skipped school to attend the event. Megan said she thinks the protest shows her generation is willing to fight for the future of the environment.

“If we don’t have a future, then there’s no point in going to school,” Megan said. “We do care about our future and it affects us more than it affects the older generation.”

Skylar Funk, a volunteer who helped organize the event, said he was surprised at the support from fundraisers and celebrities.

“When there’s high-profile celebrities and thousands of people (protesting), that’s powerful,” he said. “Our elected leaders will not be able to continue ignoring them.”

The protesters came from diverse backgrounds and came to protests different aspects of climate change.

Weinberger said he wanted to promote awareness about the health issues climate change causes. He added that climate change is recognized as the No. 1 threat to global health by the World Health Organization because of its impacts on air, water quality and how disease travels.

“Unless we act now, it’s going to get pretty bad,” Weinberger said. “It’s pretty important that we (take this) seriously.”

Mick Davoudian, a retired technology professional, said he attended the strike to raise awareness of the importance of veganism to help the environment.

Animal agriculture, the production of animals for human consumption, contributes to 87% of greenhouse gases, Davoudian said. He added environmentalists have historically downplayed the impact of animal agriculture on climate change.

“I drive an electric car, but that’s only a fraction of the cost,” Davoudian said. “If we don’t go vegan as a nation, … the future generation has no future.”

Thunberg said she doesn’t understand why people in power put short-term interest above the planet’s future.