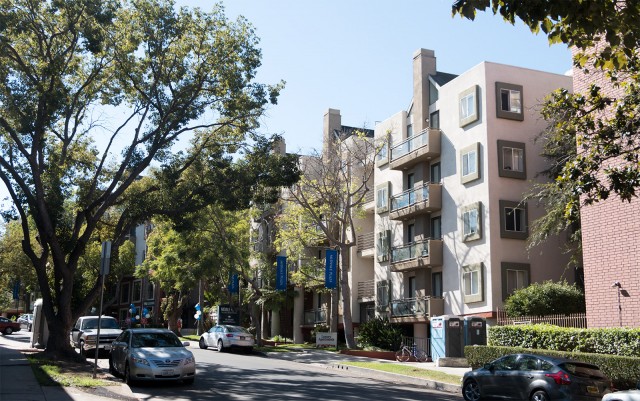 The Graduate Students Association passed a bill that calls for a rent cap on university apartments in an effort to address graduate student housing insecurity. (Daily Bruin file photo)

The Graduate Students Association has been advocating for a rent cap on university housing to address housing insecurity following the passage of a bill in late November.

The newly passed GSA bill proposes a $1,000 cap on all university housing rent costs and subsidies for students who find comparable housing outside of university housing. The association is now waiting for UCLA administrators to respond.

The bill also establishes a hardship grant fund of at least $10,000 and will allocate grants of up to $700 for each eligible student. The hardship grant would help students who need extra assistance to pay for housing.

The details of how the grants will be distributed have not yet been mapped out. However, Zak Fisher, president of the GSA, said his office is open to anyone who wishes to be a part of the process of implementing this new change.

The $10,000 came from a surplus in the GSA’s discretionary funding, said Zoe Brown, GSA’s director of affordable housing.

The GSA called on executive administrators to update the association by the second week of winter quarter on their progress in administering these new policies.

A UCLA statement sent to The Bruin stated that administrators are in the process of possibly implementing the bill.

“UCLA administrators have begun meeting with representatives from the (GSA) about their housing proposals, and discussing creative ways to address the concerns expressed by the GSA,” read the UCLA statement.

According to the 2017 Graduate and Professional Student Survey, 12% of graduate students were very satisfied with their housing costs, 43.2% were satisfied, 31.5% were dissatisfied and 13.3% were very dissatisfied.

UCLA students are experiencing issues with economic accessibility to housing, according to the bill.

Over half of graduate students’ incomes goes toward housing, and many are not able to afford housing in Los Angeles, Fisher said.

A UCLA Housing & Hospitality Services statement sent to The Bruin stated its commitment to making housing accessible for students, and mentioned housing is funded entirely by tenants and does not receive state funding. They also clarified how they price housing for students.

“(Housing) rates are determined based on calculations to ensure that the department can continue to operate and maintain current operations,” the statement said.

Households that use more than 30% of their income to pay for housing are considered cost-burdened, according to the U.S. Department of Housing and Urban Development.

When Fisher lived in Weyburn Terrace, a UCLA graduate housing complex, he used 75% to 80% of his income for rent.

“We decided 50% was reasonable, given the fact that we do live in LA,” Brown said. “Although 30% would be ideal, … we recognize that we have to be reasonable when we’re negotiating with the university.”

Xing Li, a graduate student, said he thinks the bill could help students. However, he also expressed his concern for the bill’s possible implications for the surrounding areas near university housing.

Brown added that students have to balance many competing interests, and having to pay more than 50% of their incomes to rent poses various questions on how they can pay for food or medical emergencies.

Fisher believes that since a majority of graduate students’ incomes is spent on housing, they are unable to reach their full potentials.

“If we want our (students) to be the best in the world … we ask (UCLA) to invest in them,” Fisher said.