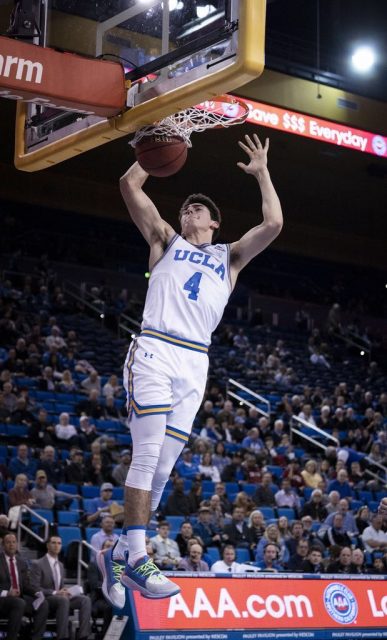 Freshman guard/forward Jaime Jaquez Jr. led UCLA men’s basketball with nine points on 80% shooting from the field in the first half against Stanford on Wednesday. (MacKenzie Coffman/Daily Bruin senior staff)

The Bruins are giving the first-place Cardinal all they can handle.

The Bruins found themselves in an early hole thanks to a barrage of 3-pointers from Cardinal guard Spencer Jones – who knocked down three long-range attempts on Stanford’s first four possessions of the game.

However, UCLA’s defense stepped up and allowed just 13 points over the next 10 minutes, helping the Bruins take their first lead of the night on a 3-pointer from sophomore guard David Singleton with 7:22 remaining in the opening half.

UCLA extended its lead by as much as seven points with just under five minutes to go, but Stanford responded with an 11-2 run to close the half with the lead back.

Freshman guard/forward Jaime Jaquez Jr. led the Bruins with nine points on 4-of-5 shooting while redshirt sophomore Jalen Hill and junior guard Chris Smith cleaned up on the glass, hauling in six and five rebounds, respectively.

The Bruins have continued to turn the ball over after giving it away 29 times in their past two contests. UCLA coughed it up eight times in the first half against Stanford’s Pac-12 leading defense, but managed to force seven turnovers out of the Cardinal as well.

The Bruins are trying to avoid falling below .500 for the first time since March 2016.