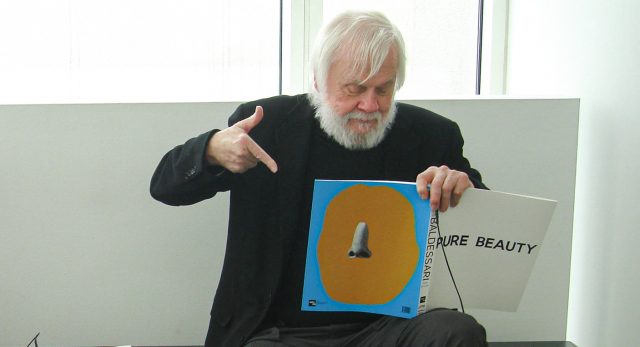 John Baldessari, a famous conceptual artist and former professor in the UCLA art department, died Jan. 2 at 88 years old. Students remember his sense of humor and his encouraging style of teaching. (Courtesy of Analia Saban)

John Baldessari loved wordplay, using it both in his art and in his daily life.

“He loved to tell terrible jokes – groaners, puns,” said Thomas Lawson, a former colleague of Baldessari at the California Institute of the Arts and dean of its School of Art. “The whole point of them was the fun of experiencing that moment.”

Baldessari, a famous conceptual artist and former UCLA professor in the School of Arts and Architecture, died Jan. 2 at 88 years old.

Baldessari believed the purpose of art should not be commodified, said Karl Haendel, a former student of Baldessari.

Another piece, titled “Tips For Artists Who Want To Sell,” is a bullet point list of steps artists should take to create works that will sell well.

In one of his most famous pieces of art, produced in 1970, he cremated all his past paintings for a work he called “Cremation Project.” He used some of the ashes to bake cookies, which were displayed at the New York Museum of Modern Art.

In honor of his contributions to contemporary art, Baldessari was awarded the National Medal of Arts by former President Barack Obama in 2014.

Students of Baldessari have said, as a professor, he sought to understand his students’ work and artistic intentions and he was open-minded. Instead of imposing his teachings on his students, he would try to learn from his students and bring out what they were trying to say, said Analia Saban, a former student of Baldessari.

“He always embraced new ideas, and the weird things we were trying to do,” Saban said.

When he did teach, he was an excellent teacher, too, said Lauren Lavitt, another former student of Baldessari.

“He knew how to make something complex simple and legible, but still with a lot of complexity behind it,” she said.

Baldessari had a strong presence and was magnanimous, said Whitney Bedford, a former student of Baldessari. When he walked into the room, people were often pulled into his orbit, she said.

“Not in a fawning way,” Bedford said. “He just brought out the best in people.”

Baldessari loved to tell stories and always kept in touch with his friends, Lawson said. He said Baldessari was always curious about what his friends were doing.

And although Baldessari often had art shows around the world, he still went out of his way to go to his friends’ and students’ shows, Bedford said. He helped to publicize her first show, she said.

Likewise, Haendel invited Baldessari to his first art show after he graduated from UCLA’s MFA program in 2003. Although Baldessari was not able to attend, the artist sent Haendel a fax message later congratulating him.

“It was a really kind thing to do for a young artist in LA, to get a fax from one of your teachers and art heroes for your first show,” Haendel said.

Baldessari used to take speaking gigs for supplemental income, traveling around the country to speak at schools about art, Lawson said.

“It was part of his economy, but also part of his modesty,” Lawson said. “He would think it was good to talk about his work to students all over the country.”

The professional art world does not always encourage kindness, but Baldessari was kind anyway, Haendel said.

“You don’t get rewarded for being moral, and it doesn’t doesn’t help your career to be generous to young artists, but he did anyway,” Haendel said.

Even after his students graduated, Baldessari was still a teacher, Saban said. Baldessari would follow up with his students after they graduated and went to their art shows around the country and in Europe, said Saban.

He built the art community, especially in Los Angeles, to be what it is today, Saban said.

“Benevolent figures like that don’t come along all the time,” Bedford said.