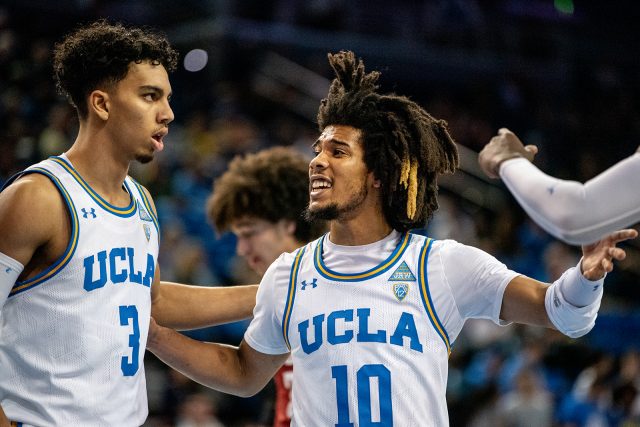 The Bruins had staged a string of comebacks over the course of their five-game winning streak, but they just made one against a ranked team on the road.

Campbell posted the first double-double of his career with 15 points, 11 assists and just one turnover. The point guard drove and kicked to junior guard Chris Smith with 8:50 left to play, and Smith knocked down his fourth 3-pointer of the game to tie things at 50.

Less than two minutes later, Campbell drilled a 3 of his own to put UCLA ahead for the first time since the first half. Campbell had missed his last nine 3-pointers dating back to Feb. 13 and was shooting 27.8% from long range on the season, but his stroke gave the Bruins a lead they would hold onto for the remainder of the game.

Four of Campbell’s eight second-half assists went to redshirt sophomore forward Cody Riley, who scored in double figures for the fourth time in his last six games. Riley scored 14 points in the second half alone, all of which came from under the basket.

But for the majority of the game, Colorado owned the paint.

The Buffaloes outscored the Bruins 20-8 in the paint in the opening half, and all three of their leading scorers ended the game with double-digit points off 2-pointers alone. Guard McKinley Wright IV paced Colorado with 20 points, and five of his first six field goals came inside the key.

Riley and UCLA flipped the script in the second half, outscoring Colorado in the paint 28-16.

The Buffaloes also entered Saturday as the best 3-point shooting team in the Pac-12, boasting a 38.1% clip from deep as a team since the start of conference play. However, the Bruins were able to keep pace in the opening half when the Buffaloes started the game 1-of-9 on 3-point field goals.

Even after Wright hit two triples in the final minute, Colorado’s five 3-pointers were tied for its fewest in a Pac-12 game this year.

Wright entered the game shooting 35.2% from distance, while Smith and freshman guard/forward Jake Kyman came into the game shooting a combined 33.1% mark on the season. Smith hit two early 3s to help UCLA take a 14-10 lead, while two triples from Kyman in the waning minutes of the opening half kept the Bruins within striking distance.

The duo finished with 26 points and six 3-pointers in the contest.

Saturday marked the third time in four games UCLA had to come back from a halftime deficit, and the win slid the Bruins up to a tie for third place in the Pac-12 standings.