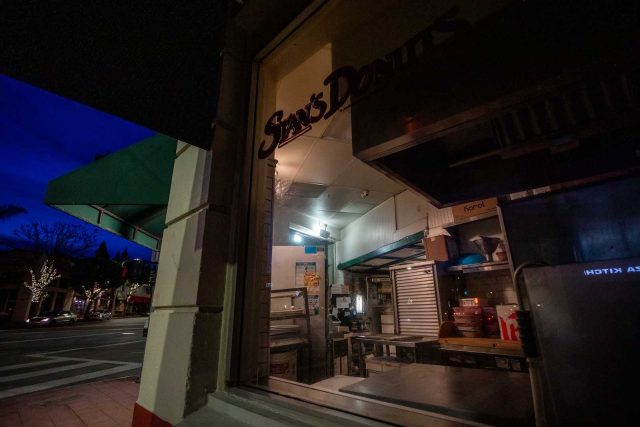 Stan's Donuts served its last doughnuts April 9, leaving a gaping hole in the Westwood community. For 55 years, the doughnut shop touched the lives of generations of Westwood residents and workers from its location at the intersection of Weyburn and Broxton avenues. (Jintak Han/Daily Bruin senior staff)

For 55 years, Stan’s Donuts stood at the heart of Westwood Village, providing comfort and memories to generations of students and residents who lived in the neighborhood.

Some discovered the establishment in its final days, while others had frequented the shop for years.

Aditya Pimplaskar had been visiting Stan’s Donuts since his freshman year. After hearing it closed down April 9, he said he felt a core part of Westwood Village was lost.

“It’s going to suck to see nobody getting doughnuts from that corner, or being able to walk by and smell them,” said Pimplaskar, a third-year computational and systems biology student. “I know I’m going to miss that peanut butter (doughnut) a lot.”

Located in the heart of the Village, just opposite the historic Regency Village Theatre, Stan’s Donuts was iconic in the area.

Pimplaskar said he went back to Stan’s Donuts several times during his second and third years to introduce his friends to the shop, just as his friend once introduced him. Stan’s Donuts was a rooted part of the UCLA student culture, he said.

“Every college has its student culture and the things students experience,” Pimplaskar said. “I think that was the biggest thing for me, knowing that I had frequented the doughnut shop.”

Joseph Russel, treasurer of the North Westwood Neighborhood Council and a third-year computer science and political science student, said he and many members of the UCLA community were disappointed to hear Stan’s Donuts had closed.

“I think that not only do a lot of both undergraduate and graduate students have fond memories of going there with their friends, but I know that a lot of alumni do as well,” Russel said. “Many of the alumni and students, both that I talked to as well as faculty, were very disappointed to hear that they had closed.”

Josh Trifunovic, owner of Rocco’s Tavern and an alumnus who graduated in 2003, said the aesthetic of Stan’s Donuts had not changed since he completed his undergraduate education. He felt the consistency made the establishment special.

“Even as things have changed around (Stan’s Donuts), it was able to remain in the midst of all this innovation because it had its classic feel to it,” said Trifunovic, who is also a member of the NWWNC.

During his time at UCLA, students would meet up at Stan’s Donuts as a starting point for their evening outings, Trifunovic said.

“(Stan’s Donuts) was very central, so if you meet at Stan’s, you could really go anywhere in the Village,” Trifunovic said. “Every single route from there went to a different part of the Village.

Paul Miller, who graduated from UCLA in 1989, and his roommate would sometimes go to Stan’s Donuts at midnight, when the shop, about to close for the day, would sell a dozen doughnuts for $1 or $2.

“If there was a big premiere movie at the Fox or the Bruin, my roommate and I would get a dozen doughnuts, eat a couple and then pass them out to people in line,” Miller said. “Everybody would be in a great mood, and it just kind of added to that kind of atmosphere.”

During Miller’s time at UCLA, Stan’s Donuts was a source of comfort food and a place where students might run into alumni who came back to visit.

Paul Kurek, a graduate student in the Department of Germanic Languages, said he believed the establishment was important to student culture because of its local identity and affordable prices.

“(Stan’s) was always cheap and … within your budget, and it was right there in the center (of Westwood Village),” Kurek said

Stan’s Donuts was an iconic business not just in Westwood Village, but also in all of Los Angeles, said Andrew Thomas, executive director of the Westwood Village Improvement Association.

“There aren’t too many businesses like Stan’s in Los Angeles, and they are not easily replaced by a long shot,” Thomas said.

Stan’s Donuts lasted 55 years in a Los Angeles environment not friendly to small businesses, Thomas said. It constantly competed for customers with other businesses and faced rising costs, such as rent and employee salaries, he added.

“It’s not often appreciated just what our businesses have to do to be successful,” Thomas said. “To (Berman’s) credit, he found a way to have a successful business for decades in Los Angeles.”

“The biggest thing for me was going in there and knowing that it’s a quick, pretty affordable and very good option for dessert,” Pimplaskar said.

Kifishia Kawachi’s restaurant, The Flame Broiler, shared the same space with Stan’s Donuts for the past seven to eight years. She noticed Berman cared deeply about his employees and customers.

“There would always be people that come in and they would talk and it (had) a very neighborhood feel when he was around,” Kawachi said. “It was a very nice little local place where people would just come by and hang out.”

Kurek didn’t begin visiting Stan’s Donuts until recently, although he knew about the store because he frequents The Flame Broiler. He started purchasing food there recently as a show of support.

“Those little businesses that are cheap and well-priced, they are really important,” Kurek said. “Unfortunately now they’re all collapsing because they are not part of a big corporate structure, so they don’t have the same financial support network and they fade away, right now when we actually need them the most.”

When a business closes down in Westwood, Thomas normally receives one or two comments from the public about the closure. When Stan’s Donuts closed, Thomas said he heard from more people than after every other closed business combined.

“I’ve heard from multiple property owners who are saying if (Berman) wants to give it a go, there are other locations he could move to not just in Westwood but other places in Los Angeles too,” Thomas said.

Kawachi said in light of losing Sepi’s and Stan’s Donuts, she hoped to see the legacies of older Westwood restaurants preserved to maintain the neighborhood’s identity.

Thomas said the business landscape is always changing, and he hopes another business will be able to come to Westwood Village and stay for a long time like Stan’s Donuts did.

“We hate to lose Stan’s; I wish he could stay for another 50-plus years, but he’s not,” Thomas said. “I hope that we can have other businesses that hang on for 50 years.”

Oruganti is a News senior staffer. He was also the 2020-2021 Enterprise editor and a News staff writer in the City & Crime and Science & Health beats 2020. He is also a fourth-year cognitive science student at UCLA.