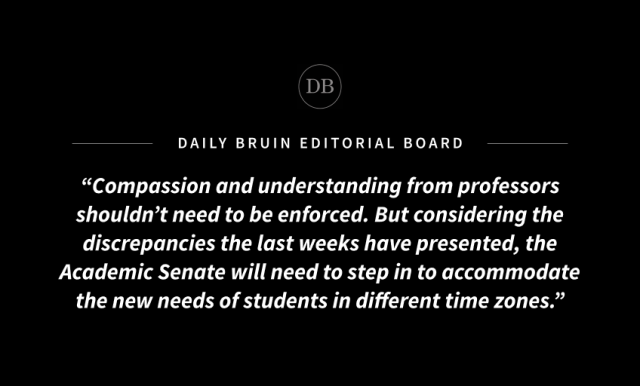 Bruins are no strangers to putting off assignments and coursework until odd hours of the night.

But in the midst of remote learning forced by a global pandemic, it’s no longer a choice spurred by procrastination – it’s the unfortunate reality for UCLA students now scattered all over the world.

Following the suspension of in-person classes on March 10, Bruins from far and wide made the decision to either hunker down in Los Angeles or leave Westwood to return home.

But with more than 6,500 international students from nearly 100 countries and an average of 16.7% of enrolled freshmen being from out of state in the past four years, UCLA’s community is more widespread than ever.

In an effort to accommodate students, the Academic Senate was quick to include extensions that would allow students to change their grading status to Pass/No Pass until the last day of spring quarter without needing a petition, as well as granting students the ability to take multiple classes on a P/NP basis.

The decision was a solid start to mitigating educational discrepancies caused by online instruction. But with such a diverse body of students from every time zone imaginable, the Academic Senate needs to extend its requirements for professors by implementing an addendum that would mandate flexible accommodations for testing, specifically for out-of-state and international students. In addition, the Academic Senate must urge professors to record lectures and make them permanently available to enrolled students.

Because professors haven’t been equally accommodating. Some have gone so far as to mandate online attendance, conduct in-class examinations and refuse to record lectures because of privacy concerns.

Considering students are already put at a disadvantage by online instruction, providing increased accessibility and flexibility can only help make it easier for them to learn effectively. Even without time zone constraints, students may be enduring financial hardships or family emergencies in these unprecedented times. Mandating attendance and enforcing scheduled examination times only further isolates students from their learning community.

The new world of widespread online learning isn’t ideal for administrators, professors or students. But the lack of a cohesive policy regarding online learning accommodations for those in different time zones makes the transition increasingly daunting, especially given midterms in the coming weeks.

Compassion and understanding from professors shouldn’t need to be enforced. But considering the discrepancies the last weeks have presented, the Academic Senate will need to step in to accommodate the new needs of students in different time zones.

Though many professors have found unique ways to make their classrooms accessible, the lack of uniform enforcement from administration leaves UCLA with no standardized measure of student success. And while there are valid concerns about students cheating during exams or a lack of attendance during lectures, students being pushed to the brink of exhaustion by time zone differences isn’t going to yield grades reflective of their abilities, either.

In a March 26 email from the Academic Senate, it urged the “UCLA community to work together in a spirit of patience and empathy as we pursue our educational goals during an uncertain time.”

But now that many professors aren’t taking that approach, it’s time the university steps in.