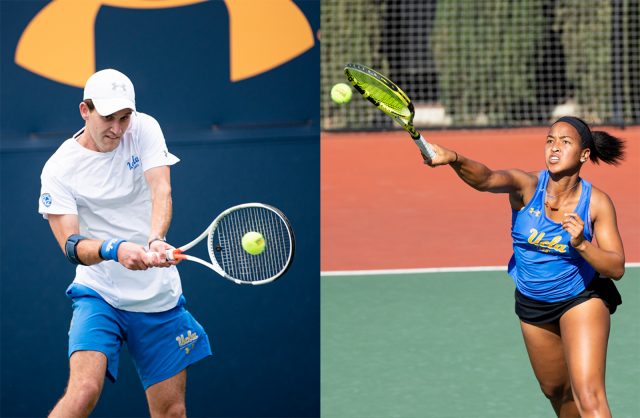 Out with the old, in with the new. Or so the saying was supposed to go.

Because “the old” are sticking around for one more year.

With only one senior on each of its rosters, both UCLA men’s and women’s tennis were set to lose just one player each to graduation following the 2020 season. But after both seasons were cut short because of the COVID-19 pandemic, the NCAA and later UCLA gave spring sport student-athletes the option to return for an additional year of eligibility on March 30 and April 23, respectively.

For both senior Ben Goldberg from the men’s side, and redshirt senior Jada Hart on the women’s, it meant they each had the chance to wear the four letters on his or her chest for one last go on the court.

And they took it.

“There was not much of a decision,” Goldberg said. “A hundred percent I would come back. There was no call on the phone with (coach) Billy (Martin), there was no long talk with my family. I was holding my breath waiting to see if the NCAA would grant eligibility or not. Playing for UCLA means absolutely everything to me, so (once they did), there was no difficult decision.”

Goldberg announced that he would return for his fifth year via a team video posted on Twitter on April 30. The last player to receive a ball passed from frame to frame featuring every member of the team, Goldberg held the ball up to the camera – with the words “1 more year” scribbled onto the felt.

A week before the announcement from the men’s team, Hart announced she would return for her sixth year in Westwood. As the first spring sport student-athlete from UCLA to announce that she would take the additional year, Hart said she wanted to finish her career as a Bruin on her own terms.

Her team had opened the season with a 12-1 record, defeating then-No. 1 Stanford first at the ITA indoor championship and then again in the first week of conference play. Hart had never defeated Stanford in her time at UCLA prior to 2020 and said the strong start by the Bruins made the news of the cancellation sting all the more.

“It was extremely painful, especially knowing that this was the team that could go all the way in the NCAA tournament,” Hart said. “There were so many great things that we had accomplished this year, and we had put ourselves in a great position to be one of the top contenders.”

On what would have been her Senior Day at the Los Angeles Tennis Center against crosstown rival USC, the team scheduled a surprise Zoom call to honor Hart and her achievements over her five-year career.

“I didn’t know what their plans were until coach Stella (Sampras Webster) spoiled their plans a little bit,” Hart said. “I got the inside scoop of what they were going to do, so it was easier for me to give them my announcement.”

In the last moments of the call, Hart said she knew she had to tell her team to save their senior speeches, because she would be back at school for another year.

“They didn’t see it coming,” Hart said. “They thought I was going to record the call just to have the memories of what they were going to say about me. But that’s when I told the girls, and they were very surprised and it turned out to be really nice.”

From LA to Germany and back, with some surprises along the way.

The Bruins recently gathered to give senior Jada Hart a virtual sendoff.

Both Goldberg and Hart said they had to work with the academic staff in the athletics department to plan how their graduation plans and coursework would be affected by their returns to Westwood next season.

Hart – who graduated in March with her degree in political science – will apply to graduate school for the next academic year, having taken her GRE on Sunday. Goldberg was set to graduate after taking a summer course to fulfill his language requirement but will postpone that requisite to the fall and continue his time as an undergraduate for the winter and spring quarters.

In the meantime, both Hart and Goldberg said they’re doing their best to stay busy while quarantined at home – through working out and spending family time that they otherwise wouldn’t have when they’re at school.

“I try to get out of the house multiple times a day,” Goldberg said. “(I’m) going on a bunch of runs and walks, and I go to my friend’s house to work out every day. He plays basketball at Oregon so it’s motivating to have a system like that, and I feel myself getting stronger every day.”

With each team retaining its respective seniors, Hart and Goldberg said the strength of both tennis programs can only increase next season.

“We come back as the same team,” Goldberg said. “Everyone will be older, and we’ll pick up right where we left off.”