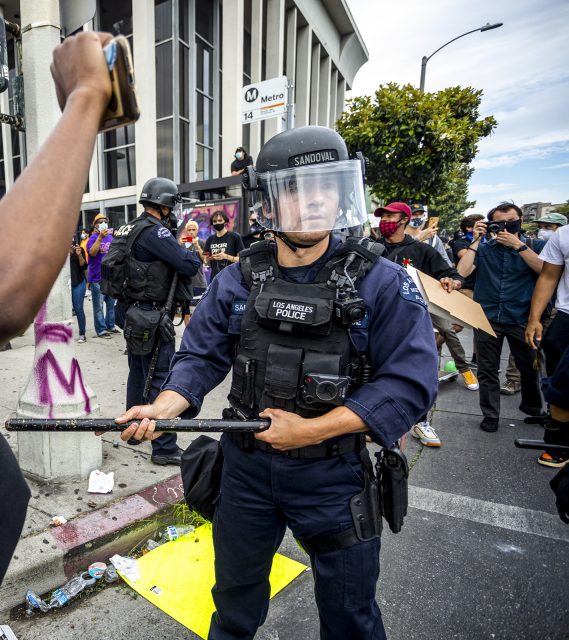 An LAPD officer with a nightstick holds off a protester on Beverly Boulevard on Saturday. The protester was telling police officers she was unarmed. (Jintak Han/Daily Bruin senior staff)

Saturday’s protests, organized by the Black Lives Matter Los Angeles movement and BLD PWR, rallied thousands across LA to protest, following the death of George Floyd earlier this week, who died after an officer knelt on his neck for several minutes. Minneapolis policeman Derek Chauvin was charged with third-degree murder and second-degree manslaughter for Floyd’s death.

California Gov. Gavin Newsom approved Garcetti’s request to use 500-700 National Guard troops to enforce peace and safety in LA on Saturday. Newsom also announced a state of emergency in LA and in LA County.

Garcetti said that he was not planning to call in the National Guard at a press conference held Saturday afternoon around 4 p.m.

“This is not 1992,” Garcetti said. “We’re not gonna evoke what happened then and call in the National Guard.”

However, at around 8:30 p.m. on Saturday, Garcetti announced in a tweet that the California National Guard was being deployed to LA.

Several students confirmed seeing National Guard troops walking around Westwood near the intersection of Strathmore Drive and Levering Avenue around 8 p.m. on Sunday.

Protests in LA started Friday in Downtown LA and have resulted in more than 500 arrests by early Saturday. Garcetti issued a curfew for the city of Los Angeles on Saturday starting at 8 p.m. that will last until 5:30 a.m. on Sunday.

Garcetti joins other states – including Minnesota, New York and more – in using military enforcement to respond to protests occurring nationwide.

Gupta is the 2020-2021 assistant News editor for the national news and higher education beat. She was previously a contributor for the beat. She is also a third-year psychology student.