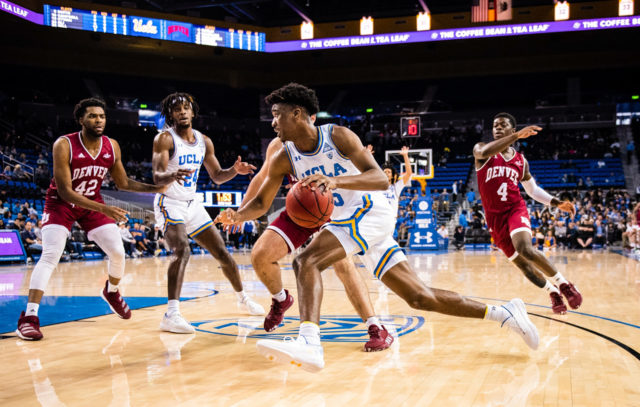 After spending the last four months in limbo, Chris Smith made the decision to return to Westwood.

The UCLA men’s basketball rising senior guard elected to withdraw from the 2020 NBA Draft, the Los Angeles Times’ Ben Bolch reported Monday. The deadline to back out of the draft pool was Monday, meaning Smith waited until the last possible day to make the call after initially declaring April 7.

“(Smith) is returning to school due to too much uncertainty on both sides of the coin,” Smith’s father Sean Smith told Bolch. “He’ll finish his degree and work to improve in the areas he needs to improve on.”

Chris Smith’s return means the Bruins will be returning 88.8% of their scoring production from last season. The wing led UCLA with 13.1 points per game last year and notched career-highs in all major per game categories, earning him the Pac-12 Most Improved Player of the Year Award.

The NBA sent out 105 invites to the NBA Draft Combine on July 23, and Smith was one of the players to make the cut. While there isn’t currently a set date for the combine, ESPN’s Jonathan Givony reported the list of final invitees may get cut down to 70 based on a league-wide front office vote if needed.

Instead of leaving his fate up to chance, Smith backed out. He was projected to go undrafted by most outlets, but was seen as a mid-to-late second rounder by NBADraft.net and HoopsHype’s Bryan Kalbrosky.

Smith had still been attending team meetings while he was in the draft pool this spring, proven by his presence at Kareem Abdul-Jabbar’s virtual talk with the Bruins on May 26.

Other notable Pac-12 players who made their final draft decisions this week are Stanford guard Tyrell Terry and Washington State forward CJ Elleby, who both elected to stay in the pool. Colorado guard McKinley Wright IV and Arizona State guards Alonzo Verge Jr. and Remy Martin all decided to return to school.

The Bruins will now be returning all five of their starters from a season ago, with incoming guards four-star transfer Johnny Juzang and four-star recruit Jaylen Clark set to join the rotation as well.