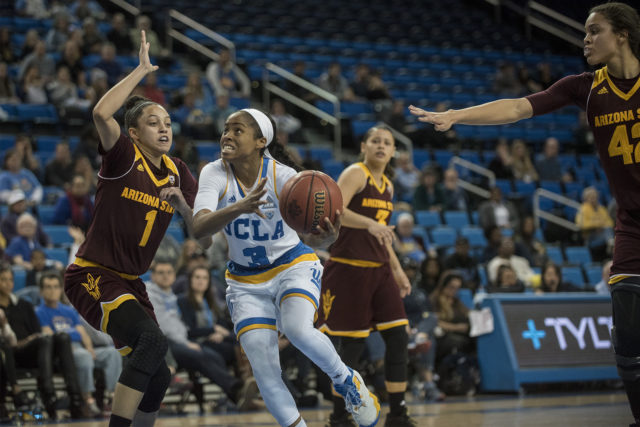 A little over two weeks into the season, the Seattle Storm sit atop the Western Conference standings, thanks in part to Jordin Canada. The guard – who spent 2014-18 competing for UCLA women’s basketball – is averaging 10.9 points and 5.0 assists per game after scoring 14 points and dishing out six assists against both the Connecticut Sun and the Atlanta Dream.

In the Storm’s 74-68 victory over the Phoenix Mercury on Saturday, Canada recorded a team-high 10 assists, marking her best tally of the short season. She added nine points and two rebounds in her team-leading 32 minutes.

Making his third start of the 2020 campaign, Trevor Bauer picked up where he left off in his last two outings. The Cincinnati Reds’ starter threw six innings Friday, allowing only one run on three hits. The former UCLA baseball right-hander punched out 12 of the Milwaukee Brewers’ hitters, bringing his season total to 32 strikeouts.

Bauer’s ERA is now a major league-leading 0.93 and he has struck out 14.9 batters per nine innings, good for second in the majors.

The New Orleans Pelicans were eliminated from the playoffs over the weekend when the Portland Trail Blazers got their 33rd victory of the season. However, in their game Friday, Pelicans guard Jrue Holiday – a member of UCLA men’s basketball in the 2008-09 season – scored a team-high 28 points in the team’s 118-107 win against the Washington Wizards.

In the first of the back-to-back games, Jrue Holiday contributed 17 points, five assists and five rebounds in a losing effort against the Sacramento Kings on Thursday. His 19.1 points per game this season is the second-highest mark of his career.

While he will spend the playoffs at home, Jrue Holiday will be able to watch his brother, guard Aaron Holiday, compete as his Indiana Pacers currently sit in a tie for fourth place in the Eastern Conference standings. The younger brother – a Bruin from 2015-18 – scored seven points with seven assists and six rebounds in a five-point win over the Western Conference-leading Los Angeles Lakers on Saturday.

Aaron Holiday dropped 17 and 12 points against the Wizards and the Orlando Magic, respectively, as the Pacers took down both teams by 11-point margins in back-to-back games earlier in the week. He added a combined six rebounds and six assists in those two games.