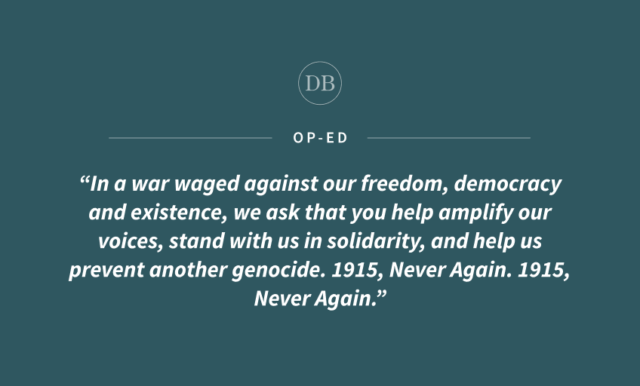 Every year, thousands of individuals from the Armenian Diaspora march to protest for the recognition of the Armenian Genocide, a crime committed by the Ottoman Empire that Turkey actively denies to this day. On Bruin Walk, “1915 Never Again” screams in silence on posters held by members of the Armenian Students’ Association as part of their annual genocide awareness week every April. For Armenians worldwide, “1915 Never Again” symbolizes a century-long struggle for justice and a future free of ethnic cleansing.

Yet, on the morning of Sept. 27, it became clear that this struggle was far from over. Armenians in the South Caucasus are now on the brink of experiencing another genocide during a global pandemic. The recent military offensive by the Azerbaijani Armed Forces against Nagorno-Karabakh violates a 1994 ceasefire agreement brokered by Russia. Nagorno-Karabakh, also known by its Armenian name Artsakh, is a de-facto independent state located between Armenia proper and Azerbaijan. Although internationally recognized as part of Azerbaijan due to Joseph Stalin’s divide and conquer tactics in the 1920s, this region has been inhabited and governed by Armenians for many centuries.

Many feared an escalating conflict since July, when Azerbaijan attacked several civilian facilities, including a PPE factory in Armenia’s Tavush region. These attacks have targeted civilian centers, including the capital of Artsakh, Stepanakert and the village of Vardenis within Armenia, forcing many to seek safety in underground shelters. Azerbaijan also violated a recent temporary humanitarian ceasefire agreement that began on Oct. 10. Within minutes of the ceasefire, the Azerbaijani Armed Forces continued shelling Artsakh and Armenia proper.

Turkey’s direct involvement and support of Azerbaijan’s large-scale attacks on Nagorno-Karabakh and the regions within Armenia are a dangerous violation of international law. Although constantly framing Armenia as the “aggressor,” Turkey’s recruitment of Syrian mercenaries to aid its military forces a month prior to the conflict suggests a different perspective. Such military and artillery aid have accompanied genocidal propaganda from the president of Turkey, Recep Tayyip Erdoğan. In a news broadcasting two months ago, Erdoğan ardently stated, “We will continue to fulfill this mission, which our grandfathers have carried out for centuries, in the Caucasus region.”

Similar propaganda was highlighted in 2005 by the Baku mayor, Hajibala Abutalybov, who vocalized “Our goal is the complete elimination of Armenians.” The belligerent Pan-Turkic policies and actions of Azerbaijan’s and Turkey’s autocratic rulers not only risk international conflict between major powers like Russia, Turkey and Iran, but also demonstrate a blatant disregard for public health during a global pandemic.

Amid this aggression, eight million Armenians in the diaspora have once again united to demand recognition of the historical and current war crimes being committed against ethnic Armenians. Armenian Angelenos have taken to the streets to protest and demand that the United States and the international community take action and provide unbiased media coverage. In just two weeks, Armenian and non-Armenian supporters mobilized and collected over $90 million via Hayastan All Armenia Fund toward rebuilding Artsakh. Close to home, the UCLA Armenian Students’ Association has spread awareness through social media and the Medics in Armenia chapter on campus has raised money to send to families and soldiers on the frontlines.

We join Armenians worldwide to call on the international community for support. The continuous bipartisan attribution of violence to both Armenia and Azerbaijan by mainstream media undermines and degrades the historical struggles Armenia has faced against Azerbaijan and Turkey. We must advocate for our own survival and ensure the international community knows the truth.

We call on the UCLA community to break the silence and take action. We implore you to recognize Azerbaijan’s violation of natural rights. We ask that you not allow our history to repeat itself. We ask that colleges and departments within UCLA speak up and deliver statements on the conflict and for other conflicts of similar nature. This is not just an Armenian issue, it is a human rights issue. We encourage you to contact your state representatives and request that they too condemn the recent violence and attacks made by Azerbaijan and Turkey. We want to thank those who have already spoken up, such as members of the UCLA’s Promise Institute, as well as House Representatives Adam Schiff and Jackie Speier.

It is time we heal from our past wounds.

Christine Mavilian is a first-year graduate student in the Department of Integrative Biology and Physiology at UCLA. She received her B.S. in physiological science from UCLA in June 2020.

Michael Abassian is a second-year public health graduate student focusing on epidemiology and biostatistics at the UC Berkeley School of Public Health. He received his B.S. in human biology and society from UCLA in June 2017.