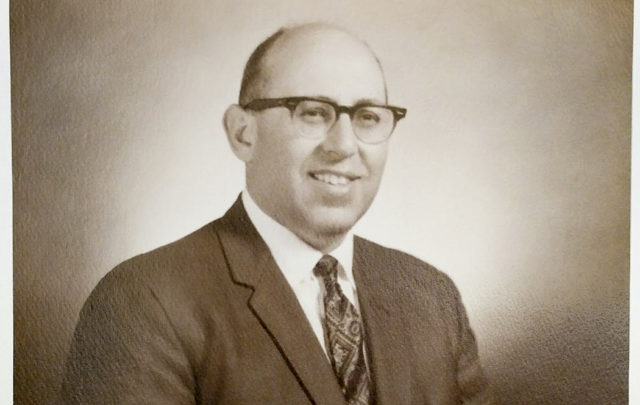 Samuel Goldfarb, a UCLA alumnus and a retired attorney from the San Fernando Valley, passed away Oct. 21 at the age of 99. (Courtesy of the Goldfarb family)

Samuel Goldfarb was devoted to UCLA, Jewish organizations in California and his legal practice.

Goldfarb, a UCLA alumnus and former attorney from the San Fernando Valley, passed away Oct. 21 at the age of 99.

Goldfarb graduated from UCLA in 1946 as part of the first graduating class after World War II, which he served in. Goldfarb was a student around the same time Jackie Robinson attended UCLA, a fact he took great pride in, said his son Benjamin Goldfarb.

Goldfarb also served on the board of trustees of the San Fernando Valley Bar Association, Averbach said. The SFVBA is an organization that provides resources such as further legal education and networking opportunities to San Fernando-based lawyers.

“He was really non-judgmental,” said his daughter, Deborah Golden. “If somebody did something that wasn’t so wonderful, he tried to look beyond what they did and think about why they might have done it.”

Goldfarb’s children said their home was full of warmth because of their parents. Goldfarb’s friends and family from around the world frequently visited their home, Goldfarb Pope added.

Goldfarb was also active in California’s Jewish community. He was involved in Adat Ari El, a synagogue in the San Fernando Valley, Averbach said. Averbach added Goldfarb was also a part of the Jewish Federation of Greater Los Angeles, an organization which provides for Jewish interests both in Los Angeles and abroad.

Goldfarb’s family also remembers Goldfarb for his adventurous spirit. He was the first among a group of couples on a trip to Egypt to ride a camel, Goldfarb Pope said. Nobody else wanted to get on the camel, she added.

“He was game for anything, like horseback riding and waterskiing,” Golden said. “He was adventurous.”

“He just said, ‘I’m going to be a delegate,’ and sure enough he became a delegate,” Goldfarb Pope said.

Recently, Averbach said a client who he and Goldfarb worked with sent him a letter of appreciation for Goldfarb. The letter said Goldfarb was a man of vision, talent and community service, Averbach added.

“When you reach the ripe age of 99, most of your peers are gone,” Averbach said. “There’s not many who remember you, but Sam was quite memorable.”