Life and Hip-Hop: Musicians reflect on how sports and music are intertwined 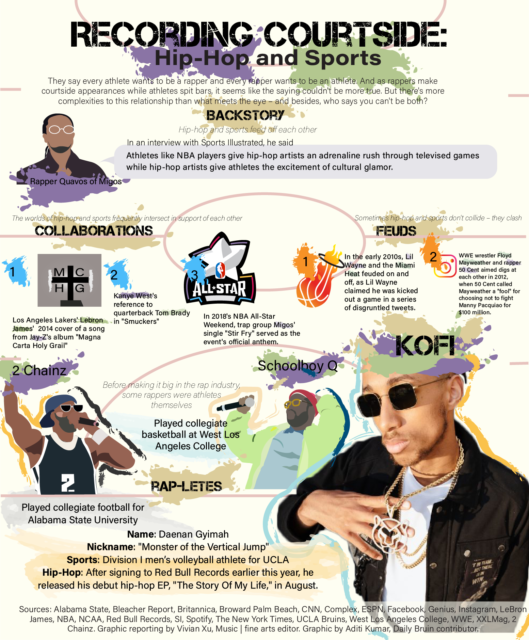 “’88 Jordan, leapin’ from the free throw/ Ballers, I put numbers on the boards.”

Comparisons to the dazzling stardom of a young Michael Jordan at the 1988 NBA All-Star Slam Dunk Contest seem most fitting for rapper Pusha T, who found a second wind in his hip-hop career with his 2013 single “Numbers On The Boards.”

The brash, minimal track captured the essence of Pusha T’s explosive re-emergence to the rap scene, much like how Jordan’s seemingly superhuman dunk shook the NBA world to its core on that fateful Chicago night. The throughlines between the worlds of hip-hop and sports are plentiful and more common than one might think. Similar narratives of grit and hard work, whether it be in pursuit of making it big in the professional leagues or signing a record deal and touring the world, serve as the running engine behind the two realms’ closely intertwined relationship.

But the beauty of eventually reaching those bastions of success comes from appreciating the grind, said Daenan Gyimah who performs as Kofi, a Red Bull Records artist and former middle blocker for the UCLA men’s volleyball program. He released a six-track EP titled “Story of My Life” in August, a melodic take on Toronto trap music.

“In sports, we’re taught that if you want anything, you just (have) to put in the work … and eventually after countless hours of work, you’re where you want to be,” Kofi said. “The same thing is absolutely true with music. If you just put in the time in the studio and actually take it serious and commit to your craft – which goes far beyond music – you’ll get to where you want to be.”

A Scarborough, Canada, native, Kofi was making hip-hop music long before he landed on the UCLA men’s volleyball team. The supportive, team-bonding aspect of his sport has also carried over into his musical aspirations, as he said men’s volleyball coach John Speraw accompanied him to business meetings with record labels. The artist credits his career growth to his time spent in Los Angeles and the opportunity to absorb its cultural diversity and broaden his musical horizons.

Kevin Kobrine, an opposite/outside hitter for the men’s volleyball team and a third-year sociology student, also creates hip-hop music under the artist name Kobrine and has taken cues and inspiration from being both teammates and former roommates with Kofi. Kobrine said there’s a contrast between the strict, schedule-oriented rigors of playing a sport and the creative freedoms that come with making music. He recalled a period during early quarantine when he would be in his studio producing and writing music for up to 14 hours straight.

“(Volleyball is) pretty strict on the schedule and measurements that you have,” Kobrine said. “You can’t miss it – you have to be there. But then the next day, I can be in the studio for 12 hours straight, (because producing music is) more about the specific feeling I have (on any given) day.”

[Related: Life and Hip-Hop: How women’s role in the industry allows for empowerment, breaking norms]

Outside of the grind-heavy processes the two worlds share, the list of explicit sports and athlete references throughout hip-hop could fill up entire textbooks. Whether Toronto rapper Drake is name-dropping NBA superstar LeBron James in a song or sitting courtside at Toronto Raptors home games, he serves as one of many prominent examples and personifications of the two worlds coming closer together.

For athletes, hearing their name in a song comes as an affirmation that they’re doing something right on the court or field. Late NBA great Kobe Bryant was no stranger to references in hip-hop, with rappers like Lil Wayne and Chief Keef both titling songs after the legend. Even Tampa Bay Buccaneers quarterback Tom Brady has a long list of rap references that highlight his unparalleled prowess and prestige on the football field.

Sports references in hip-hop keep the two entities intertwined, as Kobrine said both athletes and artists become idols for people look up to – and it’s evident the same kind of admiration is shared between athletes and rappers. Hip-hop’s constant presence in the sports world can inspire athletes to tap into their creative side, a phenomenon that he said has gained steam as athletes have begun to release music independently, outside of label control.

“Before, after or even during a game, people play music, and it’s so influential to any athlete,” Kobrine said. “(Its closeness to sports has inspired) many athletes like Damian Lillard, Lonzo Ball or Victor Oladipo to eventually make music. … Thirty years ago, you would never see an athlete (release) music.”