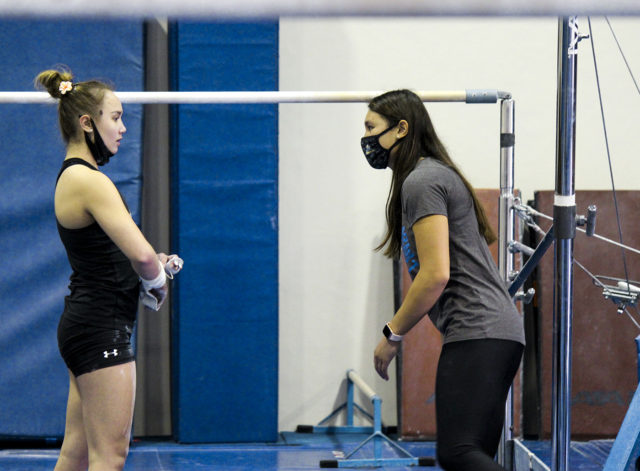 Meet the new boss, same as the old Boss.

Kyla Ross – whose 22 career perfect 10s earned her the nickname “Kyla Boss” – will return to UCLA gymnastics as an undergraduate assistant coach this season. Coach Chris Waller, the originator of the nickname, did not hesitate to offer Ross the job.

“(Ross) is respected by everybody who knows her. So when she speaks, people listen,” Waller said. “She’s not one to just say things that are important. As she speaks, it’s coming from the heart and it’s impactful.”

Last year, in a senior campaign cut short because of the COVID-19 pandemic, Ross ranked top four in the nation on three events and third in the nation in the all-around en route to being named Pac-12 Gymnast of the Year for the second consecutive season. Ross’ dominant season culminated in a Honda Sport Award — bestowed upon the top female collegiate athlete in 12 NCAA sports.

With her NCAA eligibility exhausted, the 2012 Olympic gold medalist will have the opportunity to help develop the future of UCLA gymnastics while she completes her degree in molecular, cell and developmental biology.

“I was really excited this year to have the opportunity to be able to stay with the team,” Ross said. “I think my biggest goal this year has been really to just help the girls reach their potential and just have fun while they’re out there in practice and competing.”

The 2021 season will be a novel one for the Bruins. The program graduated eight seniors last year and will now attempt to navigate a season marred by the COVID-19 pandemic. In a year full of uncertainty and change, Waller noted Ross will provide an element of stability for the team.

“She’s a huge bridge between the coaches and our athletes in terms of expressing her experience and what worked for her, what worked for the team that she helped lead last year and what’s going to help us do our best in this very different year,” Waller said.

As a product of losing so many seniors, Waller admitted the Bruins would need to rely more on their freshman class than they have in years past.

One of those freshmen, Frida Esparza, said Ross was one of her favorite gymnasts growing up, while fellow freshman Chae Campbell added that she remembers watching Ross compete in the 2012 Olympics.

“Oh my gosh, I’m going to be coached by Kyla Ross,” Campbell said. “Anything that she gives me I’m going to take to heart and do my best to fix it. And she’s the sweetest person ever, so that’s cool too.”

The impact that Ross has on the team both as a model of success and an exemplar of compassion is certainly not lost on Waller.

“Every one of them looks up to her as a role model,” Waller said. “They watched her win Olympic gold and a World Championship gold and then win every single event in the NCAA, win a national championship. And now they’ve gotten to know her personally. They’ve come to learn that she’s one of the kindest, humblest people they’ve ever met.”

For Ross – who began competing as an elite gymnast at the age of 12 — leading is not a new task. Nevertheless, she said it has been rewarding to see the team be receptive to her technical advice in addition to the personal advice she has grown accustomed to giving.

“It’s been really great to see how the team has embraced me and is willing to hear feedback from me,” Ross said. “When I was on the team, I tried to be a leader and help each girl.”

Ross was not the only member of the 2020 senior class to accept a coaching position for the 2021 season.

Recent graduate Felicia Hano accepted an offer to become a volunteer coach at Arkansas under head coach Jordyn Wieber — who graduated from UCLA and coached the Bruins in an assistant role from 2017-2019. Hano will primarily assist the Razorbacks on vault and floor as well as contributing to the program’s social media and creative content teams, a nod to Hano’s previous role as the host of “Bruin Banter.”

Gracie Kramer, the No. 3-ranked floor performer in the nation last season, will take on a volunteer assistant coaching role for Utah State. Like Hano, Kramer will serve as the creative content and social media manager for the Aggies.

“It makes me super proud that three of our student-athletes have gone on wanting to help young people be leaders themselves,” Waller said.

For UCLA gymnastics, building a culture of leadership is designed to be a natural process. Unlike most teams, the group does not have a designated captain, a tradition inspired by former coach Valorie Kondos Field.

Waller said upholding that tradition allows the team to hear the ideas of all its members, regardless of experience.

“I work really hard at making sure that people on our team have a voice,” Waller said. “I am constantly trying to encourage our student-athletes not to wait until they’re a senior to share their ideas but to do it right out of the gate. I’m so confident that in the future our student-athletes are going to leave the program, and they’re going to move on and they’re going to take leadership roles in life because they get pushed into it and they welcome it.”