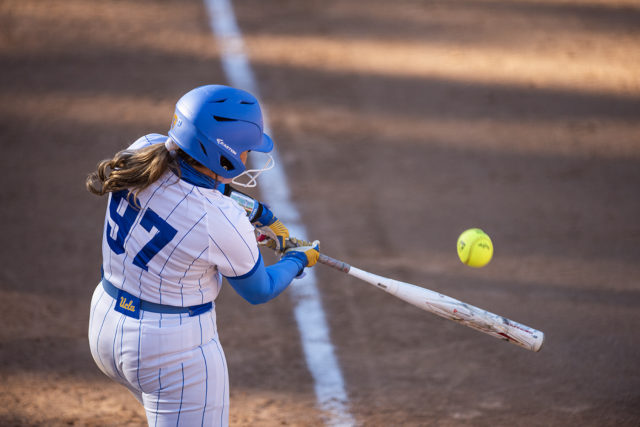 In her first games against her former school, redshirt junior infielder Delanie Wisz hit 3-for-6 and batted in three runners to go along with a run of her own to help No. 1 UCLA softball sweep its two-game series against Loyola Marymount. (Christine Kao/Daily Bruin staff)

The Bruins collected two more wins with contributions from a former Lion.

No. 1 UCLA softball (5-0) finished the weekend with a pair of wins over Loyola Marymount University (3-5) on Sunday. The Bruins outscored the Lions 17-2 combined and recorded UCLA’s first mercy-rule victory of the season in the first game of the doubleheader, winning 11-1.

Starting for the Bruins in both games was redshirt junior infielder Delanie Wisz, who started her college career at LMU before transferring to UCLA ahead of the 2020 season. Wisz batted .500 between the two games against her old team, contributing three RBIs.

“It’s kind of weird. This is my first time playing them since I transferred to UCLA,” Wisz said. “I think it does kind of give me an advantage, because I know what the pitchers are throwing, I know their strengths (and) I know their weaknesses. So being able to help my team in that way was pretty big for us today.”

After coming from behind in both of UCLA’s games versus Cal State Fullerton the day before, the Bruin offense got off to a quick start against the Lions, plating six runs in the first inning. Seven UCLA batters got on base as the team batted around, including Wisz, who hit a double to bring in a run and scored later in the inning.

The Bruins extended their lead to 11 runs with another scoring frenzy in the fourth inning in which UCLA again batted around, and LMU responded in the top of the fifth by loading the bases on two walks and a single.

While the Lions brought one of those runners in, redshirt junior pitcher Holly Azevedo stopped the rally in its tracks, inducing a double play to end the game by mercy rule. Azevedo gave up just one run in the victory after giving up four runs in her no-decision start versus Cal State Fullerton on Saturday.

“I wasn’t really nervous (in the fifth inning). Things happen, and it’s OK,” Azevedo said. “I was really confident in my defense, so if I couldn’t strike them out, I just wanted to get it on the ground so the defense could make the play.”

While the Bruins’ scoring in the first game came in two big innings, they scored in almost every inning in game two, though only with one or two runs at a time.

Redshirt junior infielder Briana Perez opened the scoring with a home run to dead center in the first, but the Lions responded immediately, scoring a run of their own in the next half-inning. From that point on, UCLA slowly extended its lead, eventually winning 6-1.

“The first game, I think we just strung a lot more hits together,” Wisz said. “The second game, we had a lot of good hits, but … we just couldn’t string them up together to get a lot of runs in.”

Redshirt freshman pitcher Lexi Sosa pitched five innings versus LMU to earn the victory, giving up just one run in the second inning on a sacrifice bunt. Coach Kelly Inouye-Perez said being able to consistently rely on freshmen such as Sosa is a testament to the athleticism and adaptability the team values.

“Any time we’re able to get in and use our versatility and depth, I think it’s our plan – everybody knows that we’re playing to get everyone in,” Inouye-Perez said. “We have some people that are very versatile. … Their ability to get in and help us this weekend was huge for us.”

Among those versatile freshmen were redshirt utility Taylor Edwards and infielder Thessa Malau’ulu, who each spent some time as catcher for the first time Sunday.

UCLA will stay at home for a midweek contest versus San Diego State on Wednesday at 2 p.m. before facing conference opponents next weekend.