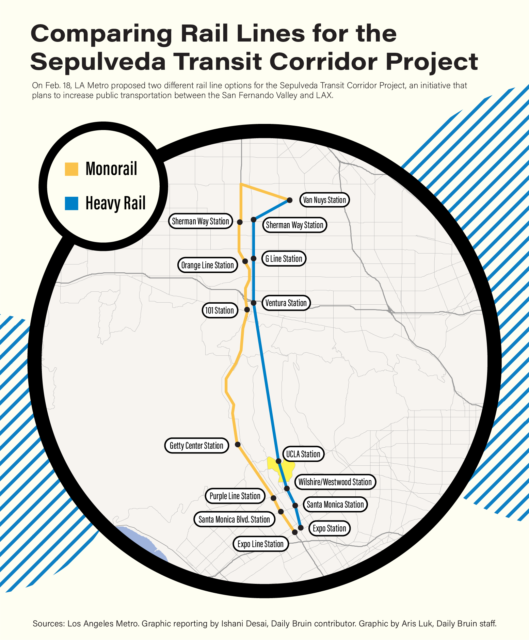 Los Angeles Metro announced two railway proposals connecting the San Fernando Valley to West LA and ultimately to LAX – one of which includes a station on UCLA’s campus.

The two proposals fall under LA Metro’s Sepulveda Transit Corridor Project. This initiative is funded by Measure M, a 2016 ordinance that aims to expand the rail transit system, find alternatives to the Interstate 405 Highway and improve traffic congestion by 2033 at the earliest.

LA Metro selected plans proposed by private companies LA SkyRail Express and Bechtel’s Sepulveda Transit Corridor Partners based on price, quality of transit, diversity and inclusion among other factors, according to LA Metro’s report. The two companies will undergo further rounds of consideration before LA Metro picks a contractor.

Spearheaded by LA SkyRail Express, one approved proposal calls for a monorail along I-405.

The transit from the San Fernando Valley to the Westside takes 24 minutes under LA SkyRail Express’ plan and 19.7 minutes under Bechtel’s proposal.

Passengers may find a monorail on the highway unseemly because of noise and air pollution, Manville said.

“Anyone who lives near those roads breathes an awful lot of pollution, … and that has real health consequences,” Manville added.

David Karwaski, director of mobility planning and traffic systems at UCLA Transportation, said a plan without a station at UCLA is not ideal.

Karwaski said about 67,000 UCLA students, staff and faculty commuted to campus every day before the COVID-19 pandemic.

“Not having a station in the middle of UCLA campus is a problem because there’s such a demand to get to UCLA,” Karwaski said. “It would be the busiest nontransfer station in the metro rail system.”

Amie Soto, a UCLA alumna, said her commute from San Bernardino County to UCLA took more than two hours and 30 minutes each way.

“I would have totally taken advantage of that,” Soto said.

Elizabeth Andrusenki, a fourth-year geography and environmental studies student, said she felt excluded from campus culture because she resides in the San Gabriel Valley. As a commuter, she couldn’t attend club events at night.

“At nine o’clock, … you don’t want to stay there and then commute home for two hours … because being on the bus at night by myself is scary,” Andrusenki said.

LA Metro will go to the LA Board of Directors to get approval of both contracts on March 25.