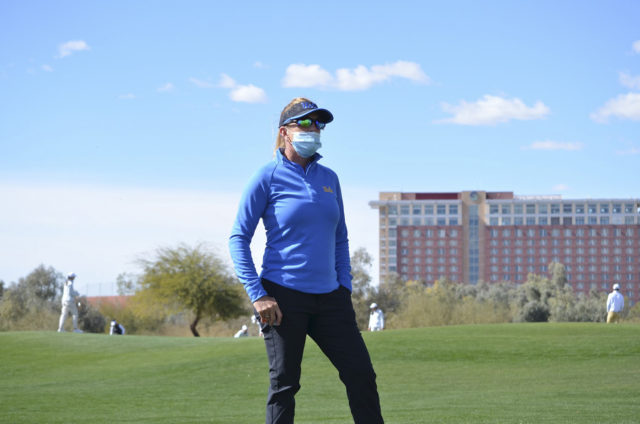 Coach Carrie Forsyth is in her 22nd year at the helm of UCLA women’s golf, which is cohosting the Bruin Wave Invitational beginning Monday.(Courtesy of UCLA Athletics)

The Bruins will make a switch to their starting lineup for the first time this season.

UCLA women’s golf is set to cohost the Bruin Wave Invitational with Pepperdine starting Monday. The tournament will run through Wednesday and consists of 15 teams, including five Pac-12 teams.

Coach Carrie Forsyth said she is changing her team’s starting lineup with sophomore Yuki Yoshihara making her 2021 debut. Yoshihara will be joined by junior Simar Singh and sophomores Emma Spitz, Annabel Wilson and Emilie Paltrinieri. Junior Phoebe Yue will be playing as an individual.

Starting her season with three straight top-three finishes, Spitz said she is excited to get back out on the course and hopes to maintain her good form.

“Keeping (the streak) alive would be really nice,” Spitz said. “I am feeling really confident and I think if I (play) the way I did last tournament, I think I can get a good position again.”

Forsyth said it’s only a matter of time before Spitz gets her first win of the season, and she’s proud of the hard work and mentality the 2019-2020 First Team All-American brings to the course every week.

“She is not playing to have a top-five finish – she is playing to win,” Forsyth said. “She doesn’t need a lot of extra words to push her along because she is very self-motivated.”

UCLA has started the season with three top-five finishes as a team for the first time since 2017. Forsyth said the team used its last week off to evaluate its performances in all the tournaments and work on a variety of aspects of the Bruins’ games.

“We have really been focusing on chipping and pitching,” Forsyth said. “For some of them, it is putting, and for some, it is ball striking. It is very individual in our sport – everyone has different strengths and weaknesses.”

Spitz said an issue with her game she’s noticed is some of her shots tail a little to the left. She also said she is always looking to improve her short game, especially her putting.

One way the team leader in scoring average a season ago has been practicing is by FaceTiming her personal coach who is back in Austria. Spitz, who is from Vienna, Austria, said she always makes an effort to FaceTime her coach before every tournament to get some extra coaching.

“I had a few lessons with my coach who is back home and we worked on some stuff,” Spitz said. “We always try to find time (with the different time zones), and it has really worked out quite well.”

UCLA will be playing at the Saticoy Club this weekend, which is located in Somis, California and is a 6273-yard, par-72 course.

Forsyth said the team will need to stay patient this week, especially with how notoriously difficult the first four holes of the course are, which she considers four of the hardest in college golf. The 22-year coach said if her team can stay mentally in control with all the challenges the course throws at them, they will be in a good spot to succeed.

“This is the kind of course you have to be very patient – this is a very difficult golf course,” Forsyth said. “Anyone who gets emotional out here is going to get demolished.”

The Bruins will tee off Monday at the Saticoy Club.