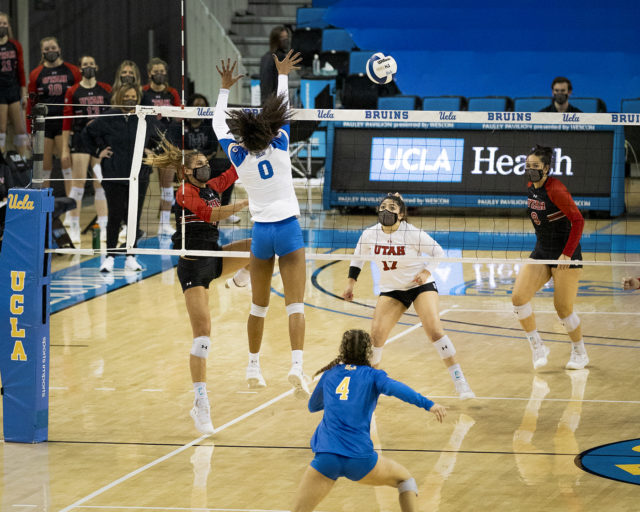 No. 17 UCLA women’s volleyball (11-5) was able to defeat No. 9 Utah (11-3) during its first match of the weekend by a score of 3-1, but was not able to replicate those results Sunday, losing to the Utes by the same score.

In the first set of Friday’s match, the two teams kept it close early, with 14 instances of a tied score, the latest one being at 22-22. In the end, the Bruins were able to score three consecutive points and win the first set 25-22.

The second set started out as a close match again, with UCLA and Utah tied at eight points each. This time, however, it was the Utes who were able to rally late in the set and go on an eight-point run to defeat the Bruins 25-20.

UCLA established an early 8-4 lead in the third set and was able to maintain its lead over Utah for the rest of the set, defeating the Utes 25-21 and setting up a potential clinching fourth set.

After opening the set with a 7-3 lead, Utah was able to extend its lead to as many as eight points, eventually leading UCLA 17-9. However, subsequent four and six-point runs by the Bruins allowed them to tie the score before claiming a 25-22 victory.

Senior outside hitter/opposite Mac May said coming back from the deficit in the fourth quarter was difficult, but not surprising.

“I think it was a great bounce back by us,” May said. “I think we have a lot of talent and a lot of skill on this team to be able win games like that, and so I don’t think we should be surprised by it.”

Coach Michael Sealy added that while he was happy about the first victory, the doubleheader would allow the Utes to adjust.

“It seems like the losing team on night one always makes better adjustments on night two,” Sealy said. “Now they’ve got a sense of urgency, and the team that won thinks, ‘Oh well, we’re better than them so we can just sit back,’ and it’s always not the case.”

Sealy’s words proved to be true for UCLA, as the team was not able to secure a second win against Utah on Sunday.

The Bruins got out to another early lead in the first set of Sunday’s match, scoring eight of the first nine points. Utah was never able to tie the score, and UCLA won the first set 25-21.

The Bruins were not as successful in the following three sets.

During the second set of the match, the Utes jumped out to an early 7-3 lead and never looked back, eventually securing a 25-18 set victory. The following set was another Utah victory, as a 13-3 run by the Utes was enough to prevent the Bruins from winning the set.

The last set of the match saw Utah quickly get out to a 7-1 lead before expanding the lead to 13-3. UCLA was able to score the next two points, but seven kills from the Utes and four errors from the Bruins allowed Utah to secure a 25-10 victory in the fourth set. This was the largest margin of defeat for UCLA in any set it has played so far this season.

Despite the loss, Sealy said his confidence in the team has not been shaken. He said he believes that with a few small improvements, the Bruins will be able to play better against the tougher teams.

“I think we just need to focus on playing cleaner volleyball,” Sealy said. “I think we’re gritty, I think we are persistent (and) I just think if we can play the ball a little bit better, we won’t need to work as hard at times.”

Junior outside hitter/opposite élan McCall added that she believes this weekend is a confidence booster for the team and shows the Bruins just how much they are capable of.

“I think for the rest of the season, we should go into matches definitely not underestimating any team, but also knowing where we stand with other teams,” McCall said. “I think we have a lot of people who can do great things on our team, and we just have to trust that we can play up to anyone’s level.”

UCLA has two matches against USC next weekend. The teams will play at Galen Center on Friday and at Pauley Pavilion on Sunday.