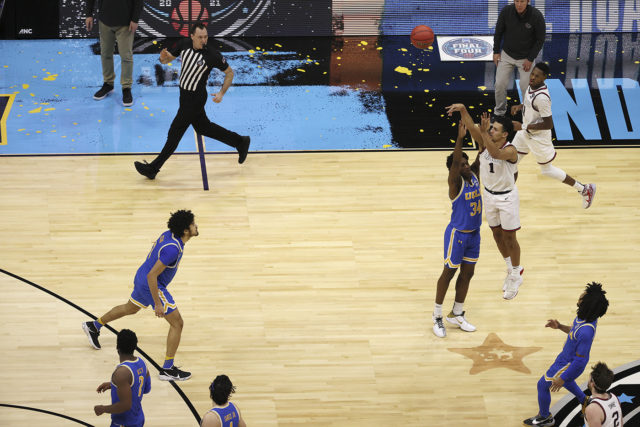 The phrase was synonymous with the Bruins’ Sweet 16 comeback win over the Bulldogs 15 years ago.

This time it was the Bruins who had their hearts broken.

Sophomore guard Johnny Juzang had just tied it up with a second-chance score in the final seconds of overtime, seemingly forcing another period of basketball to decide the winner.

Instead, guard Jalen Suggs pulled up from half court and banked it in over junior guard David Singleton. Game over.

Jules Bernard pulled up his jersey and put his hands on his head in disbelief, staying out on the court long after the play had been confirmed. The junior guard’s season was over, and after spending the previous night throwing up in a hotel room and getting hooked up to an IV, he had to follow his teammates down the tunnel for the final time this year.

“These guys, they deserved a better ending,” said coach Mick Cronin. “But like I told them, as coach (John) Wooden would say, ‘True greatness is giving your best effort.’ And that’s what they did.”

No. 11 seed UCLA men’s basketball (22-10, 13-6 Pac-12) had its chances to upset No. 1 seed Gonzaga (31-0, 15-0 West Coast Conference) in the Final Four on Saturday. Whether it was missed free throws, ill-timed fouls or an inability to make defensive stops, however, the ball didn’t bounce the Bruins’ way down the stretch and they lost 93-90 in overtime.

UCLA’s most clear chance to topple the top-seeded Gonzaga came in the final moments of regulation following a missed 3 by forward Corey Kispert with 17 seconds left to play that kept things tied at 81. After letting the clock run down, Juzang drove to the hoop looking to send his team to the national championship game.

The whistle blew and – as it had at many other points of the game – the call did not go the Bruins’ way.

Forward Drew Timme was able to draw the charge and force overtime.

“Obviously, I was hoping they’d call a block,” Cronin said. “It’s the hardest play in the world for an official and if I see the film and it looked like the guy was moving, then sometimes things aren’t meant to be. And I can tell you the official, if he did miss it, I’m sure he didn’t mean to.”

Timme scored the Bulldogs’ first six points of the extra period and the Bruins were never able to retake the lead.

Still, UCLA played Gonzaga – which has a chance to clinch the country’s first undefeated championship season in almost 50 years Monday night – closer than anyone else had all season, leading or being tied for roughly half the game.

Even after going toe-to-toe with the overall No. 1 seed, Juzang said there was no such thing as a moral victory in his book.

“We expect to win,” Juzang said. “Kudos to them, they are a very good team, but we’re UCLA.”

A one-point halftime deficit put the Bruins within striking distance with 20 minutes to play, and it was one of the most competitive opening periods the Bulldogs had to play all season. There were six ties and 11 lead changes across the first half – the last of which came off a fadeaway jumper by Kispert as the final seconds ticked off the clock.

Even with the small gap separating the teams on the scoreboard, certain seeds were planted in the first half that may have doomed UCLA and its lineup flexibility in the second half.

Bernard picked up three fouls in a five-minute span, while sophomore guard/forward Jaime Jaquez Jr. and redshirt sophomore guard Tyger Campbell each got tacked with two. The trio – each member of which has averaged over 33 minutes per game since the start of the Pac-12 tournament – sat for a combined 23 minutes in the first half.

Even with the limited minutes by their standards, each made an impact on offense, with Campbell scoring nine points and Jaquez dropping eight in the opening frame.

But with three of UCLA’s players on the bench for longer than usual, freshman guard Jaylen Clark was forced to play seven early minutes, putting up a -10 plus/minus in the first half. And with Jaquez, Campbell and Bernard on the bench, a six-point Bruin lead got erased in a matter of minutes.

“If (Campbell) doesn’t go out, we get to the half up five or six,” Cronin said. “Tyger, he was awesome.”

The continued calls against UCLA riled up its fans in attendance, sparking loud strings of boos from the Bruin faithful – albeit not as loud and contentious as the riots the loss sparked back in Westwood.

None of the fan outbursts in person were louder than when Juzang picked up the offensive foul to end regulation, but both teams ended the night with 16 fouls.

Juzang led all scorers with 29 points and four Bruins scored 14 or more, with Riley picking up a double-double and every player who attempted a field goal shooting 50% or better. Juzang, Campbell and Jaquez all hit shots to tie the game or take the lead in the final minutes of regulation, each time giving UCLA ammunition in its pursuit of a historic upset.

It just wasn’t enough to keep up with the country’s highest-rated offense, and the team that made it from the First Four to the Final Four won’t have a chance to add banner No. 12 this April.

As the buzzer sounded, the five Bruins out on the court – Juzang, Jaquez, Riley, Campbell and Singleton – huddled up, having just watched their title hopes disappear in a matter of seconds, and Juzang said he made sure to tell his teammates to keep their heads held high.

“Everybody is so proud to play with each other and to play for these coaches,” Juzang said. “And there’s no other way we’d rather go out, we went out fighting. … There’s no better way, there’s no regrets. Just everybody fought to the last play and the last shot is the last shot. (I’m) so grateful to call these guys teammates.”