By Joel Kepes and Olivia Simons 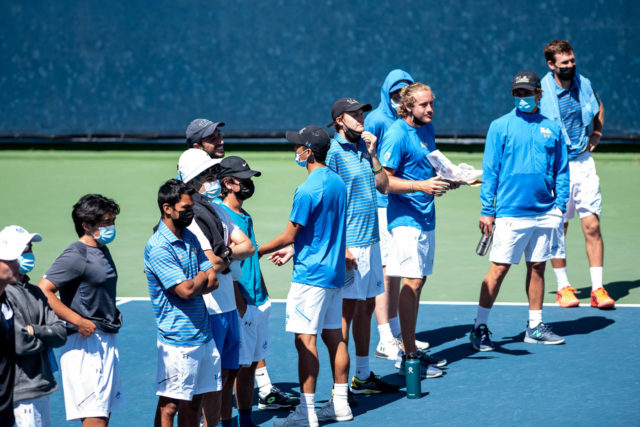 No. 34 UCLA men's tennis has won three matches in a row and eight of its last nine – including a 4-3 win against Friday's opponent Stanford on March 22. (Ashley Kenney/Assistant Photo editor)

The Bruins will travel north to match up against the one team that boasts a better conference record.

UCLA took down Stanford earlier this year 4-3 at the Los Angeles Tennis Center. However, the Bruin victory did not count toward either team’s conference standing. Friday’s matchup will take place at the Taube Tennis Center and this time it will give each team either a win or a loss on its conference ledger.

Both squads are coming into the match on winning streaks, as the Cardinal are riding a four-game winning streak while the Bruins have won three in a row – including eight of their last nine.

Junior Mathew Tsolokyan said the key to the Bruins’ success has been keying in on each individual matchup.

“Taking it one match at a time just helps us better focus on each of the individual tasks we need to accomplish,” Tsolokyan said. “(We need to) not overthink things and keep it simple.”

Coach Billy Martin said he is hoping the momentum will carry into the showdown against Stanford.

“I saw a little bit more spark in them (against Washington) and a little bit more confidence in their tennis and their shot selection, so hopefully that will carry over to our very important road trip again up to Stanford,” Martin said.

The road trip was also supposed to include a trip to Berkeley, but the match against California has since been canceled because of the minimal player standards not being met by the Golden Bears.

Redshirt senior Ben Goldberg said he has confidence in his team as the Pac-12 championships and NCAA tournament near.

The match against Stanford kicks off at 1 p.m. in Palo Alto. The Bruins will then take a week off before playing defending Pac-12 champion USC.

To kick off their last regular-season homestand before the Pac-12 Championships, the Bruins will host their Northern California conference foes.

“Both matches, Cal and Stanford, have always historically been our toughest matches of the regular season,” said coach Stella Sampras Webster. “Everyone’s preparing (and) everyone’s expecting it to be a tough match. They’re going to play their best tennis because this is their shot to get their rankings up. We’re going to be prepared and it’s going to be exciting.”

Sophomore Abbey Forbes currently holds a No. 11 singles ranking, accompanied by No. 113 junior Elysia Bolton and No. 121 graduate student Jada Hart. Forbes and Hart also hold a No. 79 doubles ranking after playing eight straight matches together since March 5 with a 4-1 record.

As a team, UCLA holds the No. 1 seed in the Pac-12 standings, directly followed by Stanford and California at No. 2 and No. 3. It is also the last team standing that has yet to drop a conference match this season, aided by its current five-match winning streak all against conference opponents.

While the Bruins have yet to see match play against the Cardinal this year, they secured a 4-1 victory against them in 2020 to conclude the shortened season. Since 1999, UCLA is 7-29 against Stanford, including a 3-14 record when playing at the Los Angeles Tennis Center.

UCLA has faced California twice this season, and won its matchup in ITA Kickoff Weekend in Los Angeles against the Golden Bears 4-0, but lost the match in Berkeley 3-4 in February.

“We’re definitely looking forward to that match because the match that we played and lost up North, we really felt like we underachieved and didn’t play our best tennis,” Sampras Webster said. “So I know the girls are looking forward to playing that and getting a little revenge on them.”

First serve against Stanford is set for 1:30 p.m. on Friday, followed by a noon start against California on Saturday.

After spending extended time in Los Angeles, the Bruins will hit the road for a series against a new opponent this season.

No. 21 UCLA baseball (16-9, 5-4 Pac-12) will travel north to take on Stanford (17-5, 4-2) this weekend at Klein Field at Sunken Diamond for the first and only time this season. The Bruins have played seven of their last 10 games at home, but now embark on a three-game stint away from Jackie Robinson Stadium.

Sophomore outfielder/left-hander Josh Hahn said after being at home for so long, it will be important for the team to learn about the different aspects of Stanford’s field before their series.

“It’s going to be of high importance to get to know the field – how the ball’s coming off the bat there, the different surfaces and the surroundings there,” Hahn said. “We’ll have to take a really good practice there of high importance and carry it on into the weekend.”

UCLA and Stanford last squared off two years ago in April 2019, when the Bruins took two of three games in Northern California. The Cardinal maintain a 33-29 advantage over the Bruins in all-time games, but each team holds 16 wins in games at Stanford.

Hahn has yet to face the Cardinal in his career, and said he’s excited to play them for the first time.

“It’s exciting to play a new Pac-12 team,” Hahn said. “My first time playing them is going to be really exciting. They’re a good team, they’re on a roll. Hopefully we can stop them and play some good Bruin baseball.”

Kepes is currently a Sports contributor on the men's tennis beat.