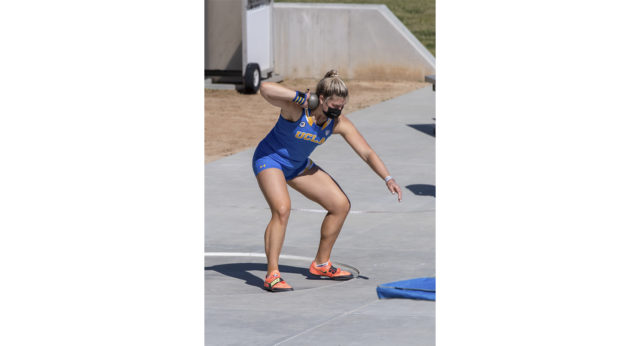 Redshirt junior thrower Alyssa Wilson won in three individual events Sunday, including a meet record and the second-longest throw in the nation this season in women’s hammer throw. (Courtesy of Chuck Utash/DyeStat)

The Bruins ended their regular season with nine event wins.

UCLA track and field hosted USC at Drake Stadium for a dual meet Sunday, with the women’s team falling 93-70 and the men’s losing 114-42. The Bruins were without multiple top competitors who were preparing for the Pac-12 championships.

Matching his season-best time in the men’s 400 meter, sophomore sprinter Ismail Turner placed third overall with a time of 46.83 seconds.

On the women’s side in the 400 meter, redshirt junior sprinter Shae Anderson crossed the finish line with the second-fastest collegiate time this season and a lifetime-best mark of 51.16 seconds to make her No. 3 all-time in the event at UCLA.

“Five girls went under 52 seconds, which is pretty crazy for just a dual meet,” Anderson said. “There was definitely a rivalry going on, and everybody knew that it was a pretty packed race and that there were some serious times going in. There was a lot of pressure, but I felt like I handled it very well.”

Earning UCLA a victory in the men’s pole vault, senior pole vaulter Kyle Brown turned in a lifetime-best height of 5.11 meters. In the men’s high jump, freshman sprinter/jumper Zaylon Thomas clearance of 2.00 meters was good to secure an event win.

Redshirt junior thrower Alyssa Wilson secured three wins and five points for the Bruins with victories in women’s hammer throw with 69.94 meters – a meet record and the second-longest throw in the nation this season – in the shotput going 17.74 meters and the discus competition with 54.17 meters.

Wilson said this season has been particularly challenging, but her performance Sunday gives her confidence for the upcoming Pac-12 championships.

“The beginning of the season got off to a rough start after because I’m coming back from COVID,” Wilson said. “I’m not as strong as I was in previous years. It’s just really been a struggle. I’m glad that I was able to have the breakthrough today.”

The Bruins earned personal bests in both the men’s and women’s 800-meters as redshirt sophomore distance runner Jett Charvet and freshman sprints/middle distance runner Kate Jendrezak clocked in at 1:50.32 and 2:06.84, respectively.

Freshman distance runner Anthony Stone crossed the finish line first with a time of 8:32.66 in the men’s 3,000-meter.

UCLA will next compete in the Pac-12 championships at Cromwell Field and Locker Track Stadium in Los Angeles from May 14 to May 16.