UCLA gymnastics’ top-ranked recruits shine ahead of arrival in Westwood 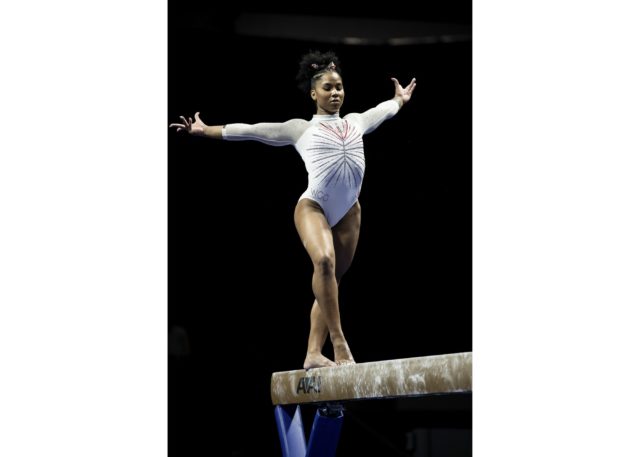 Incoming UCLA gymnastics freshman Jordan Chiles finished second in the all-around at the GK U.S. Classic. Chiles trailed only Simone Biles, who has not lost a meet since 2013. (Courtesy of John Cheng/USA Gymnastics)

At least one Bruin has represented the red, white and blue in women’s gymnastics at each of the last seven Olympic games.

UCLA gymnastics incoming freshman Jordan Chiles is on the verge of upholding that streak.

Just about a month out from the U.S. Olympic Team Trials, Chiles made a strong case for a spot on the 2021 Tokyo Olympics team with a second-place showing in the all-around at the GK U.S. Classic in Indianapolis on Saturday.

“Watching her over the weekend, I felt like everybody witnessed the birth of greatness with Jordan Chiles,” said coach Chris Waller. “She was just next level.”

Six UCLA commits took to the podium Saturday to compete in the event, which featured the top gymnasts in the nation, including 30-time Olympic and World medalist Simone Biles. The U.S. Classic marked the final opportunity for gymnasts to earn a spot at the U.S. Championships that take place from June 3 to June 6, which selects the qualifiers for the U.S. Olympic Team Trials.

The Bruins ranked second among NCAA programs with six gymnasts in the competition – including Chiles and fellow incoming freshmen Emily Lee and Emma Malabuyo. Class of 2022 commit and five-star recruit Ciena Alipio also made an appearance, with 2023 commits Sydney Barros and Katelyn Rosen rounding out the field for UCLA. Florida led the pack with seven recruits competing, while no other program was represented by more than two gymnasts.

Chiles headlined the Bruin commits, finishing second in the all-around with a 57.100 behind only Biles, who had falls on both floor and bars and still posted a dominant 58.400. Biles – a teammate of Chiles’ at the World Champions Centre gym – has not lost an all-around competition since 2013.

“Jordan won the Simone Biles gold,” Waller said. “(Biles) gets gold and everybody else is still fighting for silver-gold.”

After winning the Winter Cup in February with a 57.050 in the all-around, Chiles continued her surge toward Tokyo, claiming the silver medal on vault, bars and floor and placing fourth on beam.

The music ✅
The skills ✅

Set to join Chiles in Westwood in the fall, Lee and Malabuyo each secured top-10 finishes in multiple events.

Lee earned the bronze in the all-around at the Winter Cup and improved her score Saturday, totaling a 53.900 across all four events despite opening the meet with a fall on bars. The two-time U.S. National Team member ranked fourth on floor and sixth on beam.

Waller said Lee has had to overcome many obstacles over the past year and a half, giving private lessons for gymnastics and working for Instacart in order to fund her own training.

“One of the things I’ve loved so much about Emily is she’s completely self-driven,” Waller said. “This is Emily Lee as a high schooler going, ‘You know what, this is what I want to do, and I’m going to sacrifice whatever it takes to reach my dreams.’”

Malabuyo competed in just two events on the evening, earning a seventh-place finish on bars and ninth-place standing on beam. The Mountain View, California, native earned the top score among the seven athletes who competed in only two events.

“It’s really exciting to see Emma get out there and look so much more confident,” Waller said. “She’s had plenty of injury challenges the past couple of years. She looked great, and I’m really excited for her trajectory right now.”

With three incoming freshmen placing in the top-nine on beam, the Bruins could have a new-look lineup in 2022 on the apparatus. UCLA ranked No. 19 in the nation on the event this season, finishing outside the top-10 for the first time since 2006. Incoming freshman Ana Padurariu, who won a silver medal on beam at the 2018 World Championships, could also contribute to a revamped beam rotation.

Waller said beam – the apparatus on which the Bruins secured a comeback victory to win the NCAA championship in 2018 – has always been a priority for the program.

“We have a ton of great talent coming down on beam,” Waller said. “It’s always been a strategy of mine and at UCLA to have great beam workers. … It’s not by accident that there are a bunch of beamers coming into the program.”

Still more than a year away from joining the program, Alipio – who announced her commitment in April – did not compete in all four events at the U.S. Classic after a sixth-place all-around finish at the Winter Cup. Meanwhile, Barros, Chiles’ teammate at World Champions Centre, recorded her best finish of the evening on vault with a 14.050.

After suffering an injury in warmups at the Winter Cup that prevented her from competing, Rosen tallied a 12.900 on beam Saturday, good for 13th in the competition. The class of 2023 commit shined on floor, earning a top-10 finish behind a 13.000.

In a sport where recruiting often occurs five years before a gymnast even sets foot on campus, Waller said he simply looks for athletes who are passionate.

Bruins Pick Up a Transfer Commitment

One day prior to the competition, UCLA picked up a transfer commitment from rising sophomore Katie McNamara.

After competing for just one season at Washington – in which the Huskies plummeted from No. 11 to No. 42 in the national rankings – McNamara announced Friday via Instagram that she will be joining the Bruins for the 2022 season.

McNamara participated in the all-around in nine of 10 meets for Washington, excelling on beam, on which she posted a career-best mark of 9.900 followed by a 9.875 in the final two meets of the regular season.

Between McNamara and the No. 1-ranked recruiting class, UCLA will add eight new gymnasts to the fold in 2022.