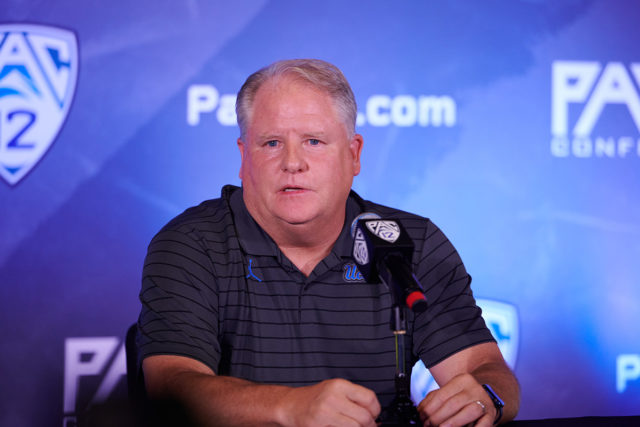 UCLA football coach Chip Kelly is entering his fourth year in Westwood after three straight losing seasons to start his tenure. Kelly's team is picked to finish in fourth place in the Pac-12 South despite returning one of the most experienced teams in the country. (Courtesy of John McGillen/Pac-12)

The Bruins are entering year four of the Chip Kelly era.

And in his fourth year, the UCLA football coach will finally have one thing that eluded him in his first three: experience.

“It took us a while to get to this point – it will be the first time we’ve had over 80 scholarship players,” Kelly said. “We have a group of juniors and seniors that have been around (and) played a lot of football. We’re going to have to rely on that experience.”

Kelly was one of three Bruins representing UCLA at the 2021 Pac-12 Football Media Day on Tuesday along with rising senior quarterback Dorian Thompson-Robinson and rising graduate student defensive back Qwuantrezz Knight.

With eight years of collegiate experience between them, Thompson-Robinson and Knight represent one of the more experienced teams in the country.

Including Knight and Thompson-Robinson, UCLA has 28 seniors, redshirt seniors and graduate students on the roster as of spring – the most ever for a Kelly-coached Bruin team.

The roster also features 22 juniors and 29 redshirt sophomores, meaning over half of the program has at least two years of collegiate experience – another first for Kelly in Westwood.

“We had 115 kids for spring ball (this year). My first season here we had about 65,” Kelly said. “So our numbers have changed drastically, and our classes are now a little more evenly distributed.”

Thompson-Robinson, the leader of the veteran group on the field, has been the team’s starting quarterback for three seasons and enters this campaign as one of the most experienced quarterbacks in the Pac-12.

In the three years with Thompson-Robinson under center, however, UCLA has yet to have a winning season.

Conference media members predicted the same lack of success for Thompson-Robinson and the Bruins again this year, with UCLA picked to finish in fourth place in the Pac-12 South in the preseason poll for the second consecutive Media Day.

In the shortened 2020 season, the Bruins actually finished in fourth place in the south division, but their four losses came by a combined 15 points.

“When you know you’re that close, it eats you alive at night,” Thompson-Robinson said. “It’s definitely a lot of self-reflection and going back and watching what you did wrong. … I’m just going to put the work in and go to work every day and let the chips fall where they land (this season).”

While Knight and Thompson-Robinson were not selected to the preseason All-Pac-12 teams, both were honorable mentions, meaning they each received four or more votes for the first two teams.

Eight other Bruins were announced as honorable mentions to make 10 total honorable mention selections and 13 preseason recognitions, both of which are the most of any school in the conference.

With most of the 13 preseason-recognized players’ being upperclassmen and a veteran coach at the helm, Knight – who is entering his sixth year in college football – said the returning talent will set the Bruins apart from other teams.

“With the return of production that we have coming back, each player knows exactly what to do and where they fit within the scheme and what exactly the coaches are asking of us,” Knight said. “When you got a team full of players like that, (I) feel like you can’t do nothing but go upwards.”

UCLA’s season will begin in exactly a month on Aug. 28 with a matchup against Hawai’i followed by a date with 2020 national champion LSU the next week and will conclude its nonconference schedule with a game against Fresno State.

Kelly has yet to win a nonconference game in his three years in Westwood but said he isn’t worried about bucking that trend in year four – at least not yet.

“We won’t talk about Hawai’i or LSU or Fresno State or anybody in the league until we get to that part,” Kelly said. “We respect everybody we play and understand that the only way you can get beat by an opponent is if you don’t respect an opponent. … The week of the Hawai’i game, it’ll be our sole focus that week.”