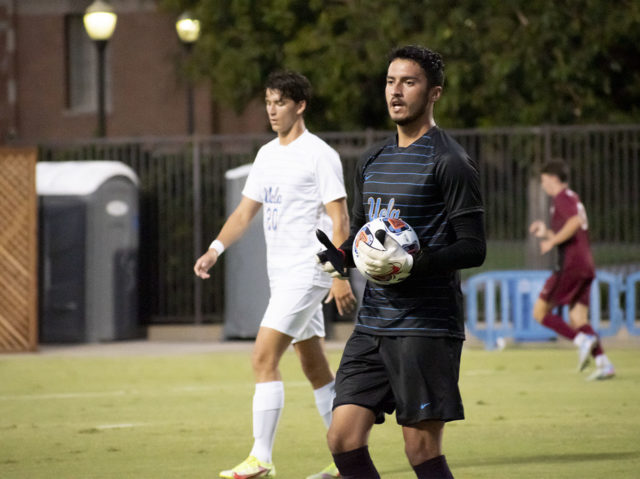 After starting their season with a loss, the Bruins now have a chance to win three straight games for the first time since October 2018.

UCLA men’s soccer (2-1) returns to Wallis Annenberg Stadium on Monday to play against Cal State Northridge (0-3). The contest kicks off a five-game homestand for the blue and gold. In the last five games the Bruins have played against the Matadors, the Bruins are 4-1. With a win streak in hand and home crowd advantage, the team has the chance to extend that advantage.

The Bruins enter the game riding two recent wins against San Francisco and UC Irvine and have an opportunity to extend their winning streak to three for the first time in third-year coach Ryan Jorden’s UCLA tenure.

“(A third win in a row) would be great,” Jorden said. “We got to be able to get ourselves in a situation where we have an opportunity to just be one step cleaner in our identity with regards to both attacking and defending.”

Through three games, the young Bruin backline has wasted no time getting acclimated to college soccer. Freshman defenders Pietro Grassi and Aaron Edwards have started all three games and have been part of a defense that has held its opponents to three goals.

UCLA will have another opportunity to stifle an opposing attack against CSUN, this time against one that has scored just two goals in its first three games.

The Matadors have also had inconsistency in their defense, which has conceded at least two goals in all of the team’s first three games. CSUN entered the season having not played since Nov. 9, 2019, after the Mountain West Conference canceled the 2020 season because of COVID-19.

As a result, the Matadors have not one, but two recruiting classes adjusting to the collegiate game.

Redshirt senior midfielder Andrew Paoli said one of the things he’s learned over his career is that no game is easy, no matter the opponent.

“Every game in college is tough, there’s no easy games,” Paoli said. “You have to treat everyone, no matter their record or their ranking, pretty much the same. The season goes by fast and you don’t want to have any regrets.”

Later in the five-game homestand, the Bruins will welcome conference foes for the first time this season.

“We have a good set of games coming out now,” said senior goalkeeper Justin Garces. “After CSUN we have Portland and Stanford, so those are two really big games. But being able to play them at home is big time for us.”

The match will kick off at 7 p.m. on Monday.