The Quad: Examining the Taliban’s rise to power in Afghanistan, tensions with the US 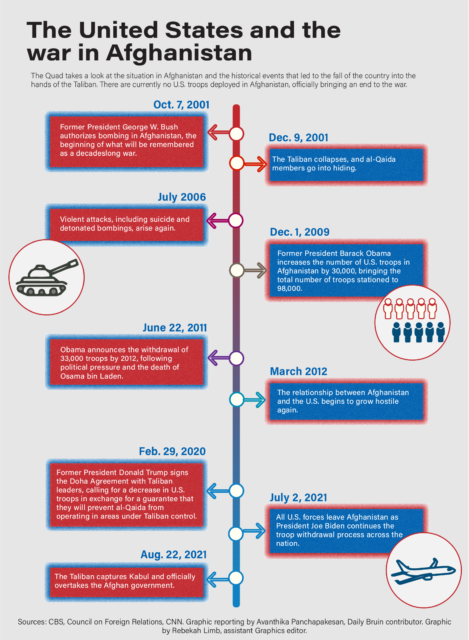 The Taliban declared victory in Afghanistan on Aug. 22 after a 20-year-long war between opposition forces, including the Afghan government and the United States.

Nonetheless, the recent turmoil does not entirely define the history of Afghanistan.

According to the BBC, the percentage of females in the workforce was steadily increasing over the past few years, and clean water was far more accessible than it was 10 years ago. But recent events seemed to have masked this progress.

Formed in 1994 and seizing power in 1996, the Taliban rose to prominence during the Afghan Civil War following the withdrawal of Soviet troops. Founders hoped to create an Islamic nation that would provide safety for citizens and fight against corruption.

The Taliban has a history of perpetrating violent attacks against ethnic minorities and women. Women, for example, were stripped of employment and given extreme corporal punishments, including execution.

According to Human Rights Watch, reporters covering female protestors in Afghanistan were brutally beaten by Taliban officials last week. This attack also comes after Taliban spokesperson Zabihullah Mujahid promised that the Islamist group would not persecute or attack journalists.

For third-year psychobiology student Leeba Farooqi, international intervention is the key factor that contributed to the fall of Afghanistan.

“For so many years the West has had a major interest in Afghanistan for its materials and its location,” Farooqi said. “Whether it was the Soviets back in the ’80s (or) … America’s interest in the war against terrorism, all of that has really led to Afghanistan just being very unstable and unable to really create its own foundation for itself with so much involvement from other countries.”

Global citizens have blamed various entities involved, including past and current U.S. leaders and the Afghan government.

Second-year political science student Sydney Scher said pointing fingers at one individual in this situation is a reflection of misinformation and a lack of knowledge on Afghanistan’s history.

“Everyone wants someone to blame when it comes to such catastrophic issues like this, but honestly, I think the blame can be dispersed among the (past) four administrations that have kind of overlapped,” Scher said. “The responsibility is not just on one person.”

Now, the war in Afghanistan has come to an end. But at what cost?

According to the BBC, the U.S. government spent approximately $955 billion over the course of the last two decades of battle in Afghanistan. Millions of Afghan refugees have fled their homes. According to Vox News, 5.9 million Afghan citizens have also been displaced.

Nguyen added that an increase in state and federal funding will greatly help Afghan refugees acclimate to the U.S.

“The idea that refugees come here to simply live off of welfare is just very untrue, very ridiculous because the amount of funding that they get from the federal government is extremely small,” Nguyen said. “Our agency is really prioritizing trying to find employment opportunities for these families, … so that they can really integrate and become our new neighbors here in Southern California.”

It is unknown what the future of Afghanistan will look like. U.S. Republican Senator Lindsey Graham recently said in a BBC interview that he predicts U.S. forces will end up reentering Afghanistan. However, the Biden administration and other Democratic Party leaders do not appear to have any such immediate plans.

“If the U.S. were to either try to go back into Afghanistan and pour all of their money and military resources into that, there would have to have a much different approach,” Scher said. “It would have to be more prioritized on civil negotiations and peacemaking … (rather than) just dropping troops on the ground.”

For the time being, Nguyen said Bruins can continue to spread awareness and amplify the voices of the Afghan community in the greater LA area.