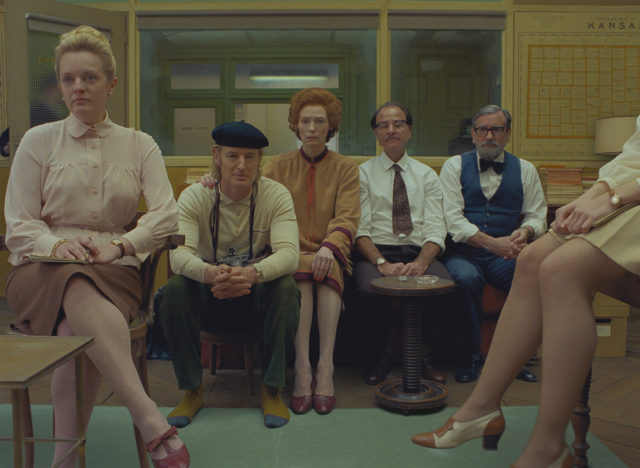 Wes Anderson's "The French Dispatch" brings together stories of a 20th-century American newspaper operating from a small French town. (Courtesy of Searchlight Pictures)

Wes Anderson signaled out the dispatch – and is receiving a resounding “oui oui” in return.

The eccentric director’s latest release, “The French Dispatch,” is a whimsically entertaining take on the energetic buzz of the newsroom and the journalists who run it. Rich with dry wit and vibrant cinematography, the movie gradually unveils the fictional French town Ennui-sur-Blasé’s unassumingly quaint guise to reveal a cultural hub overflowing with stories to be told. Though subject to a rather incongruous storyline, the film’s snappy dialogue, sharp editing and satisfying composition culminate in an enlightening watch.

Opening with a close-up shot of two hands preparing a dish of drinks, rapidly spinning the platter with precise movements to concoct a variety of beverages, the scene encapsulates the aesthetically pleasing visuals reflected throughout the entire movie. Just like the film as a whole, everything about the sequence is meticulously timed and calculated, from the choreography of the hands to the degree of the platter spin, but it manages to give off the impression of graceful effortlessness, rather than uptight vigilance.

With such an aura of quirky elegance, the movie itself romanticizes the tale of a hodgepodge of expatriate journalists stationed in France, tasked with bringing the sociopolitical culture of Ennui-sur-Blasé to their home base in Kansas. The decentralized storyline is divided into assorted sections based on the content categorization of the paper, with each subdivision helmed by a different journalist assigned with reporting on a specific subculture of the French town.

Alas, this segmentation may be clever in theory, but its execution leads to a disjointed plot that hinders the film from adopting a steady rhythm and flowing smoothly. Rather than granting the viewer a holistic overview of the newspaper, the movie is more akin to several standalone short films stitched together, with their shared DNA being Anderson’s signature playful touch, rather than a common storyline.

Fortunately, the shortcoming in plot structure is redeemed by virtually all other aspects of the film, from the immaculate scoring to the artistic composition of each shot. Perhaps most amusing of all are the rapid-fire quips fired off by each character, who deliver lines with such speed and deadpan that jokes can easily sneak by if the viewer isn’t paying enough attention. Flippant remarks teasing journalism’s objectivity and the dilemma of producing art for consumption are peppered into the script, tying in more serious themes with ease.

The gargantuan ensemble cast is to thank for bringing the jocular dialogue to life, with impeccable performances from Frances McDormand, who portrays the stoically determined journalist Lucinda Krementz, and Tilda Swinton, who is almost unrecognizable as melodramatic reporter J.K.L. Berensen. Even in moments when the dialogue is lackluster and the storyline is shallow, ensemble members like Timothée Chalamet and Benicio Del Toro reinvigorate the scene with emotive facial expressions and exaggerated body language.

Of course, there are a few odd ones out in the bunch – namely Owen Wilson – who sluggishly struggle to keep up with the quick trot the movie sets. Wilson’s characteristically languid demeanor weighs down the pacing, and his appearance is thankfully brief. But frankly, with a cast this large, one actor’s mediocre performance is not enough to imbue vast detriment, as strength in numbers equates to a robust all-around cast performance.

Aside from the acting, the film shines in its successful delivery of a pleasurable visual experience. Segueing from dramatic film noir to a comical animation, the movie is nothing but engaging as it daringly dabbles between genres and keeps the cinematography fresh with down shots, extreme closeups and freeze frames galore.

A playful color palette and striking composition run through the variety of shots as the common threads, as it is quite clear that Anderson’s frequent collaborator and cinematographer Robert Yeoman knows the drill and executes it well. Perfectly symmetrical frames that flit between a muse and artist pairing, as well as a vintage tint to the hues of the set, are delightfully pleasing to the eye, curating the retro 20th-century ambiance.

Phenomenal scoring from composer Alexandre Desplat is simply the icing on the cake, enhancing the whimsical nature of the film with a tinkling harpsichord and tooting wind instruments against syncopated strings. The chitter-chatter of the reporters and contained suspense in the car chase scene are only amplified by the soundtrack, which never veers into being overbearing and consistently supplements just what each scene needs.

As a supposed love letter to journalists, the film as a whole leans a bit too heavily into the rose-tinted lenses, but such a romanticized perspective only adds to its charm. The clacking of the typewriter and titter in the newsroom may be an idyllic take on the profession, but it is one that earnestly reminds viewers of the care that goes into storytelling.

And it is unequivocally obvious that Anderson put his heart into this tale.