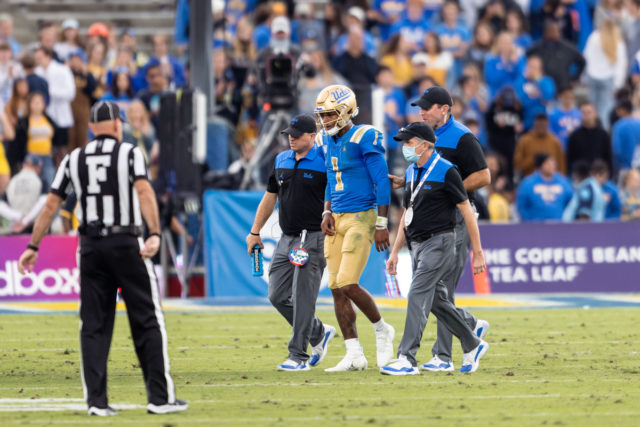 Senior quarterback Dorian Thompson-Robinson walks off the field with trainers after sustaining an injury in UCLA football’s loss to No. 10 Oregon on Saturday. (Tanmay Shankar/Daily Bruin senior staff)

With the ball, and down by three points, the Bruins were driving down the field.

They had been on the short end of 20 unanswered points put up by the Ducks earlier in the half, yet had closed the gap with consecutive scoring drives in the fourth quarter.

It wasn’t UCLA’s starting quarterback leading UCLA on its final offensive snap, however. Instead, it was redshirt freshman Ethan Garbers who was under center, in place of a hurt Dorian Thompson-Robinson.

He had completed two passes since coming onto the field. But on second-and-10 with 48 seconds to go, Garbers looked right toward redshirt junior receiver Kyle Philips and released his pass. Cutting in front was Oregon cornerback DJ James, who made the interception and cemented the Ducks’ ninth win in 10 games versus the Bruins.

“We’re very high on Ethan,” said coach Chip Kelly. “He’s an unbelievable competitor, he’s got all the qualities you want in a quarterback. It’s just the one thing he lacks is not his fault. It’s just experience – he hasn’t played a ton of snaps.”

Despite UCLA football (5-3, 3-2 Pac-12) carrying a three-point lead into halftime, the Bruins lost their third straight home contest 34-31 to No. 10 Oregon (6-1, 3-1). UCLA was shut out in the third quarter and its two late scores were not enough to overcome a 17-point deficit to start the fourth.

UCLA’s first second-half score came on a 2-yard touchdown plunge by senior Thompson-Robinson that cut into the double-digit deficit. That run capped off a 12-play, 75-yard drive in which Thompson-Robinson completed 8-of-10 pass attempts. Another touchdown by redshirt senior running back Brittain Brown just over four minutes later brought the Bruins to within three, after redshirt senior linebacker Jordan Genmark Heath intercepted a pass at the Oregon 40-yard line.

The Genmark Heath interception was one of two interceptions hauled in by the Bruins in the final frame. Senior defensive back Jay Shaw’s interception with three minutes left in the end zone set up the Bruins’ failed go-ahead drive.

“We came out there fresh, fast, physical, and that’s the momentum change we needed,” Genmark Heath said. “When those other teams start getting tired, we’re just getting started.”

Despite being held off the scoreboard for the first quarter, Oregon erased an early 14-point UCLA lead in the first half. Coming out in the second, the rhythm on offense didn’t stop as they racked up an additional 20 points.

It was the fourth consecutive game in which the Bruin defense allowed its opponent to score on the opening drive of the second half.

Through the air, Ducks quarterback Anthony Brown completed 11 straight passes to begin the second half, and did not miss a throw for the entire third quarter. His work through the air largely drove Oregon’s offense down the field, with Brown tallying a season-high 296 passing yards.

“We had a lot of mistakes early on,” Genmark Heath said. “We’re extremely close (to) being a great team. You guys see that every single week. Once we take care of those little things, the game won’t even be close.”

On the opposite side of the ball, UCLA went three-and-out on its first series of the half and was forced to punt. The Bruins’ longest drive of the quarter eventually stalled at midfield after consecutive false start penalties on junior offensive lineman Jon Gaines III and redshirt junior receiver tight end Greg Dulcich. On the night, the Bruins had four false starts, one holding call and three offsides penalties.

“We knew our game plan and we didn’t do what we needed to do,” Gaines said. “We ended up getting behind and our defense, credit to them, they played their hearts out. They gave us the opportunity to catch back up and make the game more interesting than it needed to be. But once again, it’s just us not executing.”

In the final play of the third quarter, the Bruins again failed to put points on the board when Thompson-Robinson was sacked by Oregon defensive end Kayvon Thibodeaux to put UCLA out of field goal range.

Thibodeaux had eight tackles, 4.5 of which were recorded as tackles for loss. He was also the player who hurried and hit Thompson-Robinson on what would be the quarterback’s final pass attempt of the game.

“We slid the protection to (Thibodeaux), we kept backs in protection, we put the tight end on him – we tried to give as many different looks as possible,” Kelly said. “He’s what everybody thinks he is. He’s a heck of a football player.”

With the loss, the Bruins’ opportunity to cement their postseason eligibility for the first time since 2017 will have to wait another week. Kelly fell to 0-3 against his former team, and UCLA continued its streak of failing to beat a top-10 opponent over the past decade.

“Football is not a game of perfect,” Kelly said. “It’s a game of resiliency and if they continue to be as resilient like they are, then most of the time, you end up on the right side of things.”