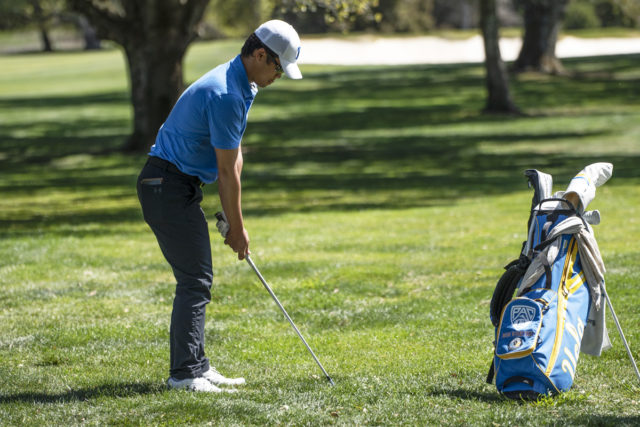 Bryan Teoh concentrates on his stance. The senior led UCLA men's golf at the Golf Club of Georgia Collegiate Invitational held on Friday through Sunday with a 26th place, 2-under 214 performance. (Jeremy Chen/Daily Bruin)

The Bruins ended their fall season near the bottom of the pack.

Less than two weeks after earning its best finish in its last seven tournaments at the Wolf Pack Classic, UCLA men’s golf finished 13th in the 15-team field at the Golf Club of Georgia Collegiate Invitational in Alpharetta, Georgia, on Friday through Sunday. The Bruins did not have a single golfer finish inside the top 25 individually.

Bling, who was the highest-placing Bruin and a top 20 overall performer in UCLA’s previous two tournaments, finished tied for 59th over the weekend with a 5-over 221. Maruyama followed his 18th-place finish at the Wolf Pack Classic with a 13-over 229, which tied for 70th in the 75-man field.

Despite the rest of the UCLA lineup placing higher, Freeman said the team had a poor practice round and needed better play from its two best performers from the tournament prior.

“The biggest problem is that we came here during the practice round, and we just really started hitting the ball inconsistently,” Freeman said. “I was happy to see some of our younger guys play well, … but Devon didn’t play well and Sean didn’t play well and you can’t have that. They’re two seniors and they got to play better.”

Senior Bryan Teoh’s 2-under 214 was the best score for the Bruins and was good for 26th in the field, while freshman Omar Morales’ even-par 216 and graduate student Eddy Lai’s 3-over 219 tied for 37th and 52nd overall, respectively.

Despite never playing at the course before, Morales said he felt confident coming into the weekend and avoided big mistakes.

“I felt like I was in a good spot coming into the week so I knew I could shoot very low,” Morales said. “Unfortunately that wasn’t the case, but I still made very wise decisions with my game. (I) just didn’t make any really costly mistakes, (and) that helped me to stay consistent over the weekend.”

Morales and the rest of the UCLA roster will now have to wait until the next calendar year to compete as the Bruins enter a three-month break before their first tournament in 2022.

Teoh, who finished tied for 25th in his only other start this season, said his performance at the Golf Club of Georgia Collegiate Invitational helped him decide what to work on during the layoff.

“Technique-wise, I’ll probably work on my driving,” Teoh said. “I did not drive it well the second and third round, although I putted really well, so that’s what I’m going to work on – maybe a few swing changes.”

Morales, on the other hand, said every aspect of his game needs improving. The freshman shot an even-par 72 in all three rounds the past tournament after shooting a 72 to cap off his 19th-place performance the competition prior.

“If I see my game, I don’t think I have any real deficiencies, but I wouldn’t call them an upstart or an advantage I have over the field,” Morales said. “Right now everything is very average, so I think just practicing very little details all over my game will make the difference in the spring.”

The Bruins will begin the winter and spring portion of their season Jan. 24 at the Southwestern Invitational in Westlake Village, California.

Carlson is currently a reporter on the women's basketball beat. He was previously a contributor on the softball beat.