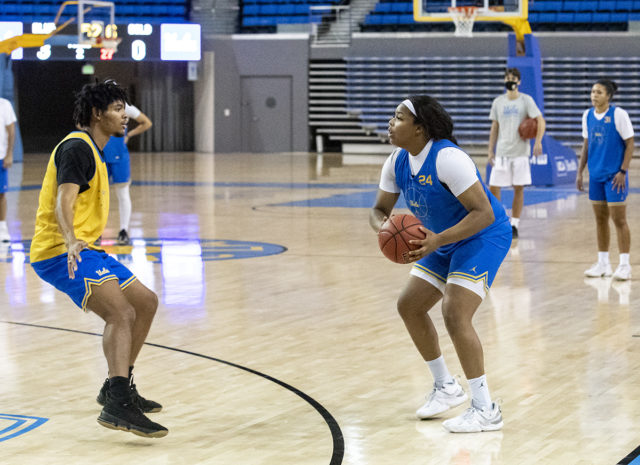 Graduate transfer Iimar'i Thomas is defended by a practice player on the left wing during practice Friday morning. The UCLA women's basketball forward is set to make her debut as a Bruin on Nov. 10. (Grace Wilson/Daily Bruin)

For the Bruins, building team chemistry is a science in itself.

Two weeks out from its season opener against Pepperdine, No. 20 UCLA women’s basketball held practice in Pauley Pavilion with open media availability. Welcoming nine new players on the roster this year, coach Cori Close explained what it takes to maintain a tight team bond.

“People always say, ‘How do you have such a close family every year?’ I say, ‘We work at it,'” Close said. “It’s not just because everything is perfect all the time – we’ve got problems (and) we have conflict, but we work through it and really try to handle things in a healthy manner. Those bonds go a long way when we’re developing on-court chemistry.”

Graduate student guard Natalie Chou said the nicknames the players have for each other – such as “Nat” for Chou – are examples of the team chemistry that helps translate to success.

Now in her third season with the Bruins, Chou brings a unique perspective to the table. She’s both a veteran and a transfer, having played for Baylor for two seasons before transferring to UCLA in 2018. The team’s third-leading scorer last year said she is helping the new transfers navigate the transition.

“We’re all like family – I wouldn’t let some random person call me Nat,” Chou said. “These are my sisters.”

Close added that establishing chemistry on and off the court involves commitment from all players.

Graduate transfer IImar’I Thomas is one of the newest players on the roster to call Natalie by “Nat,” as Thomas just transferred as a graduate student to spend her extra year of eligibility at UCLA. The forward was named the American Athletic Conference Player of the Year in her last season with Cincinnati and became the second player in school history – the other being NBA Hall of Famer Oscar Robertson – to score 50 points in a game.

Thomas has only been with the Bruins for a few months, but she touched on the importance of calling one another up and said she has found a place among her teammates both inside and outside the gym.

“Off the court we really try to build with each other and get to know each other in different ways to the point where we can translate on the court very well,” Thomas said. “It just flows from our off-the-court chemistry to on the court.”

As one of four healthy forwards on the active roster, Thomas could potentially have an expanded role in her first season donning the blue and gold following the loss of sophomore forward Emily Bessoir to an ACL injury earlier this offseason. As the tallest active player on the roster, and a freshman last year, Bessoir played the most minutes of any nonstarter.

In the absence of Bessoir, Thomas said the Bruins will need to employ everyone to fill in for the German forward’s contributions.

“You can’t replace somebody like Emily, and we just know as a collective that everybody needs to step up because we did lose a huge piece of what we do,” Thomas said.

Thomas finished her career at Cincinnati ranking first in field goal percentage at .581, second in field goals made at 761, and third in total points with 1,925. As a Bruin, the forward will have a chance to achieve something she didn’t as a Bearcat: qualifying for the NCAA tournament.

Both Close and Chou said they expect Thomas to be integral to the team’s success this season, adding that she is still just scratching the surface of her abilities.

“What we want is that she becomes more of a hunter rather than a reactor,” Close said. “She’s going to be really key for us, so we’re challenging her every day on a lot of different facets of the game because we believe in her.”

Chou also emphasized Thomas’ dependability and expertise as a shooter.

“We just know that when IImar’I is open, we better not miss her,” Chou said. “When we get it to her, it’s an automatic bucket.