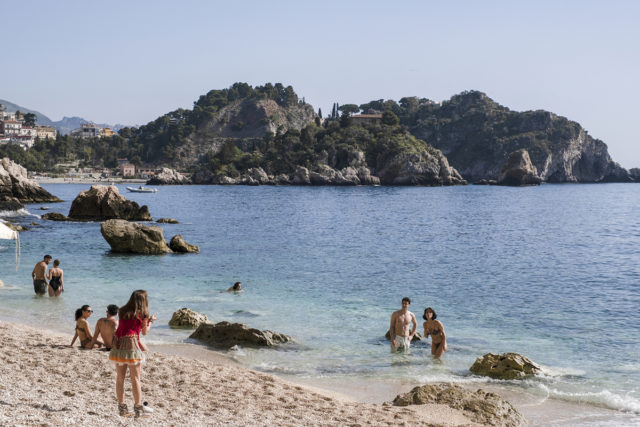 In the Sicilian sandbox, the web of relationships grows more complex.

The fourth episode of the second season of “The White Lotus” follows each character and their individual issues as they become more entangled with each other at the Sicilian resort. Whereas tensions were simmering beneath the surface in previous episodes, they have finally started to emerge “In the Sandbox.” Furthermore, the show more explicitly comments on the hegemonic ideas of class and gender, particularly regarding the patriarchy and the wealthy.

The episode opens with a new day – Cameron (Theo James) wakes next to Lucia (Simona Tabasco) and Mia (Beatrice Grannò) while Ethan (Will Sharpe) answers a tense call from his wife Harper (Aubrey Plaza), who asks why he did not pick up her numerous calls. Portia (Haley Lu Richardson) attempts to mediate both her duty to Tanya (Jennifer Coolidge) and her growing interest in Albie (Adam DiMarco), trying to explain to a discontented Tanya that she feels like she won the lottery in meeting him. After breakfast, Tanya meets two older men who invite her onto their boat and immediately makes the judgement that they are nice, which speaks to how her manner of examining people is very dependent on their status.

This opens up discussion for one of two intriguing themes of the episode and the series as a whole: Class and the way in which the wealthy are unaware of their prejudices that are apparent to others. Aside from dialogue and explicit references to this, the show also subliminally incorporates this idea in its imagery. There are many shots of historical statues and Renaissance-style paintings hung up around the resort that look out of place, such as in the hallways and the guests’ rooms. They are evidently not displayed for people to admire their artistry, but to supposedly elevate the guests’ experiences of a glamorized Italy.

Meanwhile, Harper returns from her outing with Daphne and finds a used condom wrapper stuck in the crevice of the couch, evidently upset. Out on the beach, Lucia and Mia talk about their circumstances as sex workers at a resort. They are very aware of their social standing amongst the wealthy guests and dream of lives bigger than the ones they are currently living. Lucia feels especially guilty that she dragged Mia into her own lifestyle and mess, while Mia tries to assure that she doesn’t feel any resentment toward Lucia at all.

Lucia and Mia’s beachside conversation sets up the second main theme of the episode: The power that the patriarchy unfairly bestows on men and takes away from women, and the rebellions that ensue. Toward the end of her rant, Lucia cynically says “all whores are punished in the end” in anger and desperation, painfully aware of how she is perceived by society and disappointed by how stuck she feels in her current situation. Lucia seemingly desires to transform her life, but at the end of their conversation, she and Mia spot Bert (F. Murray Abraham) and Albie and set their eyes on the other Di Grasso men as their next clients.

The tension of the patriarchy is apparent even between the married couples. As they process the night they had, Cameron asks Ethan to uphold “bro code” and jokes around with him about their antics. When Harper returns from her time with Daphne, Ethan is back in their room zoning out, presumably regretting his actions from the night before. Harper seems glad to have learned that Cameron and Daphne’s relationship is twisted in her opinion – a sign that she is constantly examining her own marriage through the eyes of others and is perhaps a bit jealous of the Sullivans.

Later in the episode, Lucia tells Mia that she does not dream of money but of opening her own store, to which Mia says that she, likewise, only wants to be a singer. Mia suddenly has the idea to seduce the piano player Giuseppe (Federico Scribani) to further her career, which ultimately ends with him collapsing hours after Mia feeds him the wrong pill by accident. The social commentary of the episode comes full circle in this moment when Mia runs up to the hotel manager Valentina (Sabrina Impacciatore) to tell her that she can sing for the crowd if needed, while the sirens from the emergency response team are still running.

The sandbox is growing more crowded as more pieces fall into the mix.